Team GB are getting ready to head to Miraflores, Peru, for the 2013 ISA World Standup Paddle and Paddleboard Championships 24th February – 2nd March.

In preparation for the event SUPboarder will be bringing you a series of features, all about the guys and girls making up Team GB, including how their trainings been going, what equipment they’ll be taking with them, and lots lots more! So make sure you check out the Team GB Feature each week.

This year in Peru, the GB Team of six will be completing in all the SUP disciplines. SUPboarder is looking forward to following their progress.

BSUPA in partnership with Surfing GB are proud to announce the UK SUP team that will compete in the 2013 ISA World Championships in Miraflores Peru next February.
Over the 5 days they will compete in a series of competitions in surf, sprint and distance against teams from around the world such as France, Spain, Australia, Hawaii, USA, South Africa, Brazil, Mexico and many more.

Andre – “I was super stoked when I found out I had won the BSUPA this year but then to find out I also had made the British team was the icing on the cake. I’m really excited to get to Peru and show the word what we Brits are made of.”

Jim – “2nd year in a row what an honour! I’m delighted to be going back to Peru as part of Team GB. 2012’s competition opened my eyes to the high performance of SUP surfing and without a doubt I came back a better surfer for it. I am very excited to be returning as part of a larger and now more experienced team.”

Charlie – “I’m really excited to be going to The World Championships in Peru as part of the GB team as it is not every day you get to represent your country and travel to such fantastic places. Hopefully we will inspire more people to take up the sport and to set and achieve goals they maybe thought were never possible.”

Ollie – “It’s really exciting to be selected for the GB team going to Peru. Representing my country at a world championship is something I’ve dreamed of.”

Abi – “I’m thrilled to have been asked to represent GB in Peru, and very excited, it’s such a great opportunity. Huge thanks to Wavehunters Cornwall and Clean Earth Energy for sponsoring me and making this dream possible, and thanks to Quick Blade Paddle UK for my new paddle!”

Marie – “I am thrilled to be part of the six strong GB team and proud to be the first female SUP racer to represent GB at the World Championships. Having never visited Peru it will be an amazing adventure and a fantastic opportunity to meet and compete against some of the world’s leading international standup paddle boarders. And thanks to the support of Red Paddle Co I’ll be racing on their new 12’6 Red Race. I can’t wait!”

Matt (Peru Manager) – “I used to love surfing, I now am completely consumed by SUP, needless to say I’m an addict and I am stoked to be part of the Team heading to Peru. I’m the on the ground team manager, supporting as best I can. I’ll also be filming and trying to get as much atmosphere to share with you all when we get back.”

John (UK Manager) – “I was lucky enough to be in the team in 2012 and it’s great to be involved this time in getting the team out to Peru where I know they will do amazingly.” 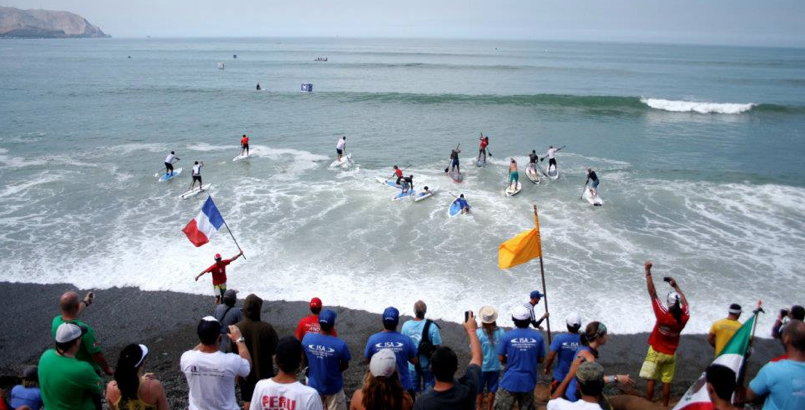 Team GB, UK Manager John Harvey, has been talking to SUPboarder, and had this to say about the team and the event;

“I was lucky enough to make it on the team for the 1st World Championships in 2012 and wanted to use my experience of the trip to help the next team get there with as little effort and worry as possible. So BSUPA made me the team manager to pull the best of Britain together after the British Championships to form the team. We’ve had a few stumbles along the way but if everything ran smoothly then it wouldn’t be interesting. It looks like we’ll have a full team this year which is brilliant and they are lucky to have Jim Richardson with them on the surfing team as he was in the 2012 team and will be an invaluable source in Peru. Unfortunately I won’t be going with the team due to my wife and I expecting a baby girl but Matt Smith will be taking over the Peru side management of the team for me.”

Stay up to date with Team GB on SUPboarder and on the Team GB facebook page.
SUPboarder will be bringing out the first Team GB Rider Feature next week, so stay tuned!