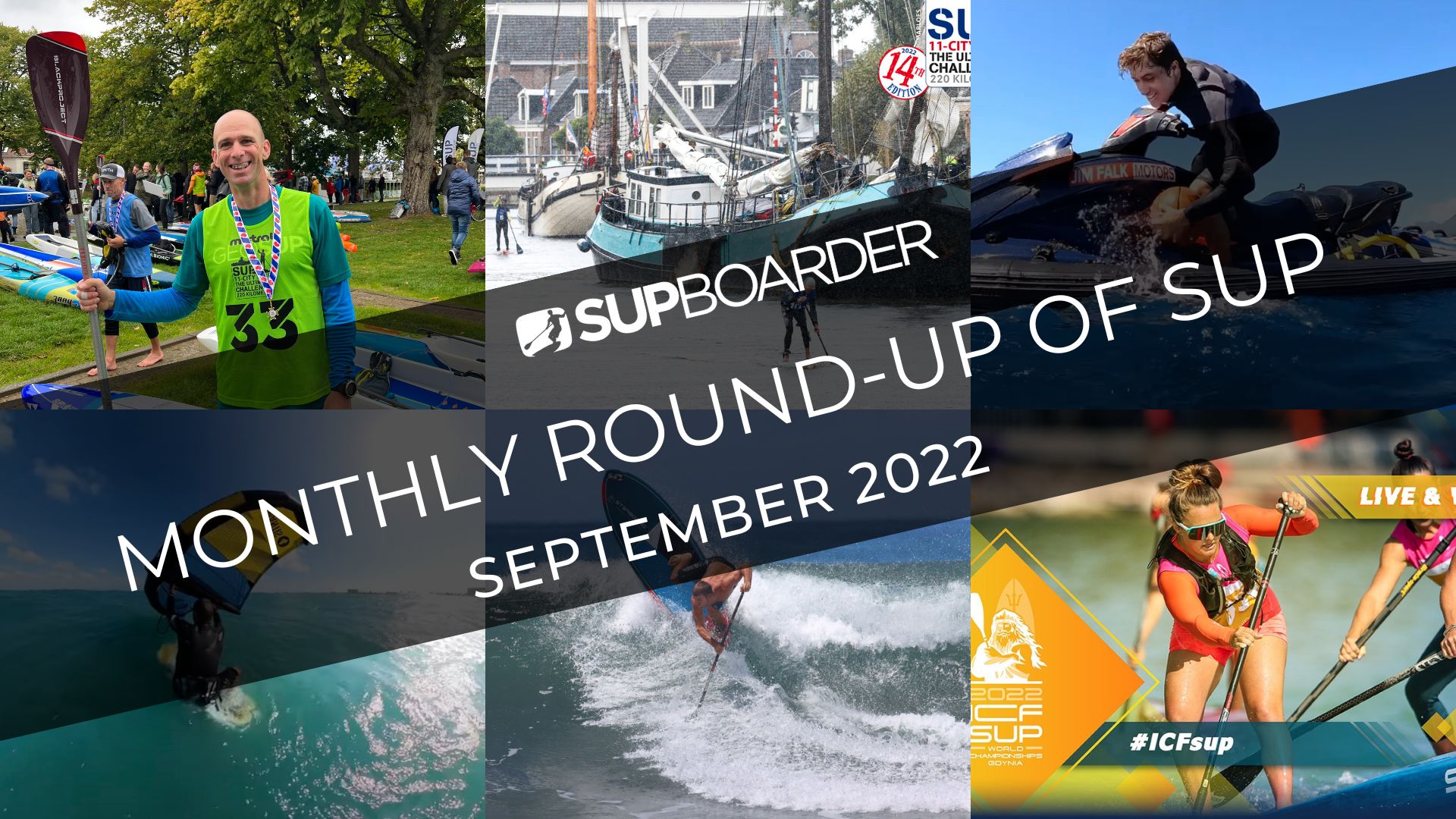 Welcome to our collection of the biggest news and stories that have taken place in the SUP world from the previous month. Let's recap what happened in September 2022. It was definitely a month for the events.

The 2022 SUP 11 City Tour has been completed this year, with over 200 competitors battling through wind and rain to finish the 5-day, 220km Tour, plus the non-stop race event.

The 14th edition of the Annual 5-Day SUP 11-City Tour wrapped up today, Sunday 18th September. The last stage of the tour was only 28 kilometers from Dokkum to Leeuwarden, but paddlers had endured a hard prior 4 days totalling 192km. On their way, the athletes paddled through Burdaard and passed one of many typical windmills. Flying through Bartlehiem the competitive athletes picked up pace since today they also were a time trial. Read more to see the full results and further information.

The ICF World SUP Championships were held on Poland this year from 7-11 of September. 2022 saw new champions crowned, former champions re-crowned, and, perhaps most importantly, new athletes emerge from around the world.

The Sprints were won by Connor Baxter in the men’s who reclaimed his world title. April Zilg celebrated her first world crown as she took the gold medal.

The Long Distance race was won by Australia’s Michael Booth, and Spain’s Esperanza Barreras broke through for her first ever ICF title in tough conditions.

Connor Baxter won his second world title for the weekend in the Technical race and Frenchwoman Melanie Lafenetre won her first ever ICF crown in the tech race.

Also held over the weekend was the inaugural ICF Special Olympics Stand Up Paddle clinic. This was a tremendous boost for the confidence of young athletes with event ambassador and two-time reigning SUP world champion Fiona Wylde leading a team of Olympians, world champions and other elite athletes to provide the clinic for a group of Special Olympic athletes, that culminated in a race on “SUP Dragon” boats.

The inaugural stop for the APP World Tour in Korea delivers spectacular action & brings together local sup community. With Gwangalli Bridge as a backdrop, the APP World Tour was welcomed to Busan and saw hundreds of amateur racers and elite athletes compete in the Busan SUP Open.

The Busan SUP Open was stop #3 of the APP’s Racing World Tour. Saturday saw Japan’s Rai Taguchi and Denmark’s Caroline Kuntzel claim their first ever sprint win on the World Tour and Sunday’s distance race saw our athletes embark on a very technical 10km distance race, where Taguchi clinched his second win of the weekend with April Zilg winning it for the women.

Stop #2 of the Racing World Tour has wrapped in London after a weekend of action-packed sprints and the iconic distance race down the River Thames. Japan’s Rai Taguchi kept Connor Baxter looking over his shoulder in the sprints but, as usual, Baxter kicked into 6th gear and managed to hold off the young guns once again and continue his winning streak. April Zilg unsurprisingly claimed the sprint title for the women after battling with Caroline Kuntzel and Esperanza Barreras through a competitive set of heats.

Spain’s Espe Barreras, dominated the women’s distance race on the River Thames from the get-go and remained untouchable to the the rest of the field. New Caledonia’s Clement Colmas powered ahead and managed to hold off Arthur Arutkin and Connor Baxter in a battle to the finish line, taking the win in his debut on Tour.