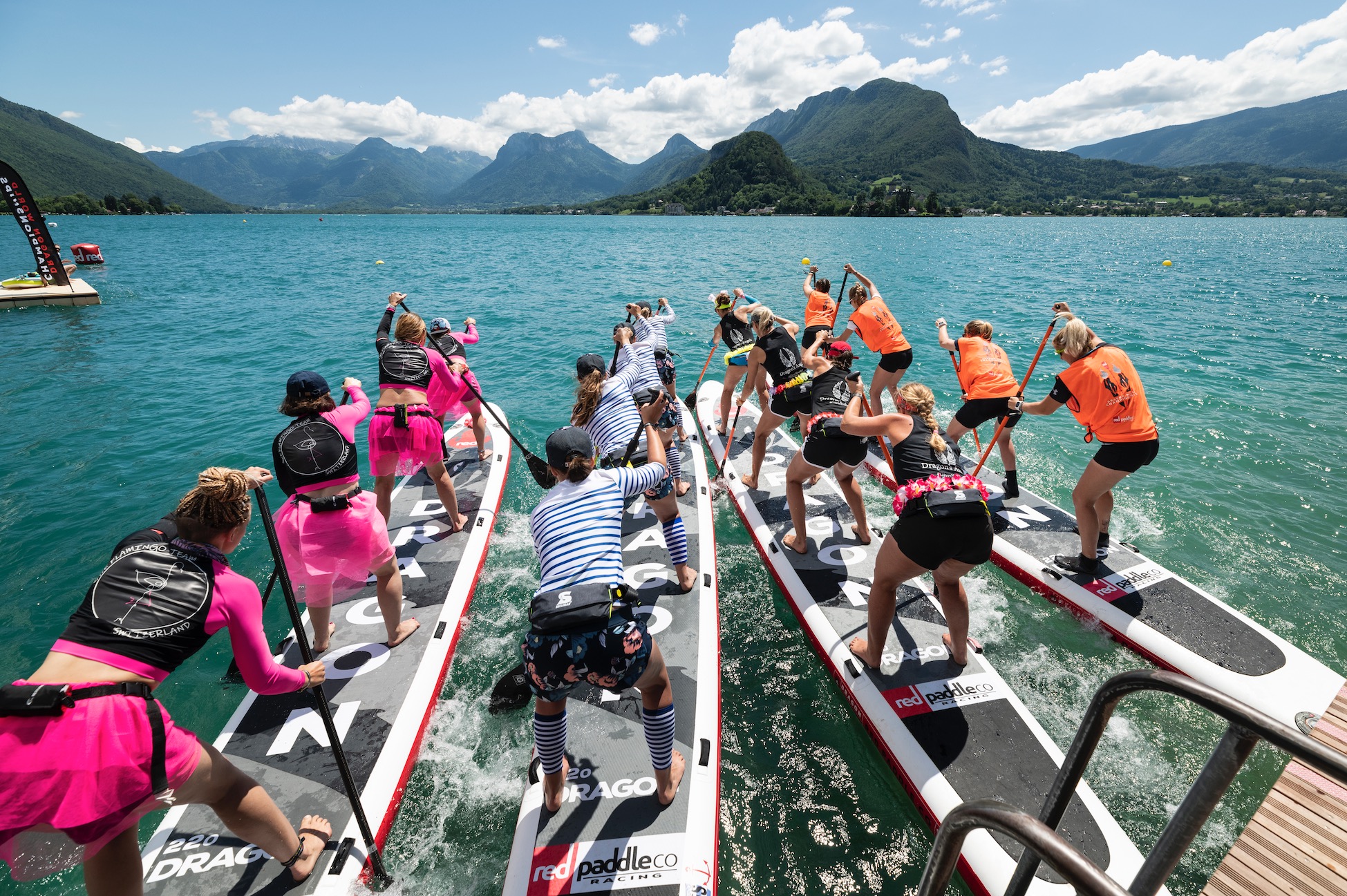 Red Paddle Co bring us all the action from the recent Dragon World Championships on Lake Annecy, France. Red Dragons, Pink Flamingos and plenty of fun on and off the water! An exciting team event not to be missed next year!

The 2019 Dragon World Championships has concluded for another year. Over 30 teams from around the globe took part in the adrenalin fuelled, team SUP racing event hosted by Red Paddle Co, in partnership with The Alpine Lakes Tour and Nike Swim.

Set on the stunning shores of Talloires, Lake Annecy in France – the mountainside setting was the perfect stage to watch the action unfold….

The two-day, Red Paddle Co Dragon World Championships is an event like no other. It involves teams of four battling it out on a mighty 22-foot inflatable ‘Red Dragon’ board in an aim to be crowned the ultimate victors.

This year was no different with 30 teams representing 15 countries congregating on the shores of Talloires, Lake Annecy. The event was to be the most spectacular, dedicated team Stand Up Paddleboard (SUP) World championships in the competitions three-year history.

In association with Nike Swim and the Alpine Lakes Tour the event welcomed new additions and activities such as SUP Yoga, the POP race which invites beginners to race on Red Paddle Co’s 10’6 Ride boards, two long distance races in the form of the 10km Mini-FAT race and a 32km FAT race and of course adrenaline-fuelled Dragon racing. There was also a kid race for budding SUP stars.

“The Dragon World Championships was born out of the concept of bringing people together from across the world to celebrate SUP and enable paddlers, of any ability or level to take part in some fast, fun SUP racing on a global stage. To see so many teams travelling from across the world to compete and share this unique experience is what truly sets the Dragon World Championships apart.” 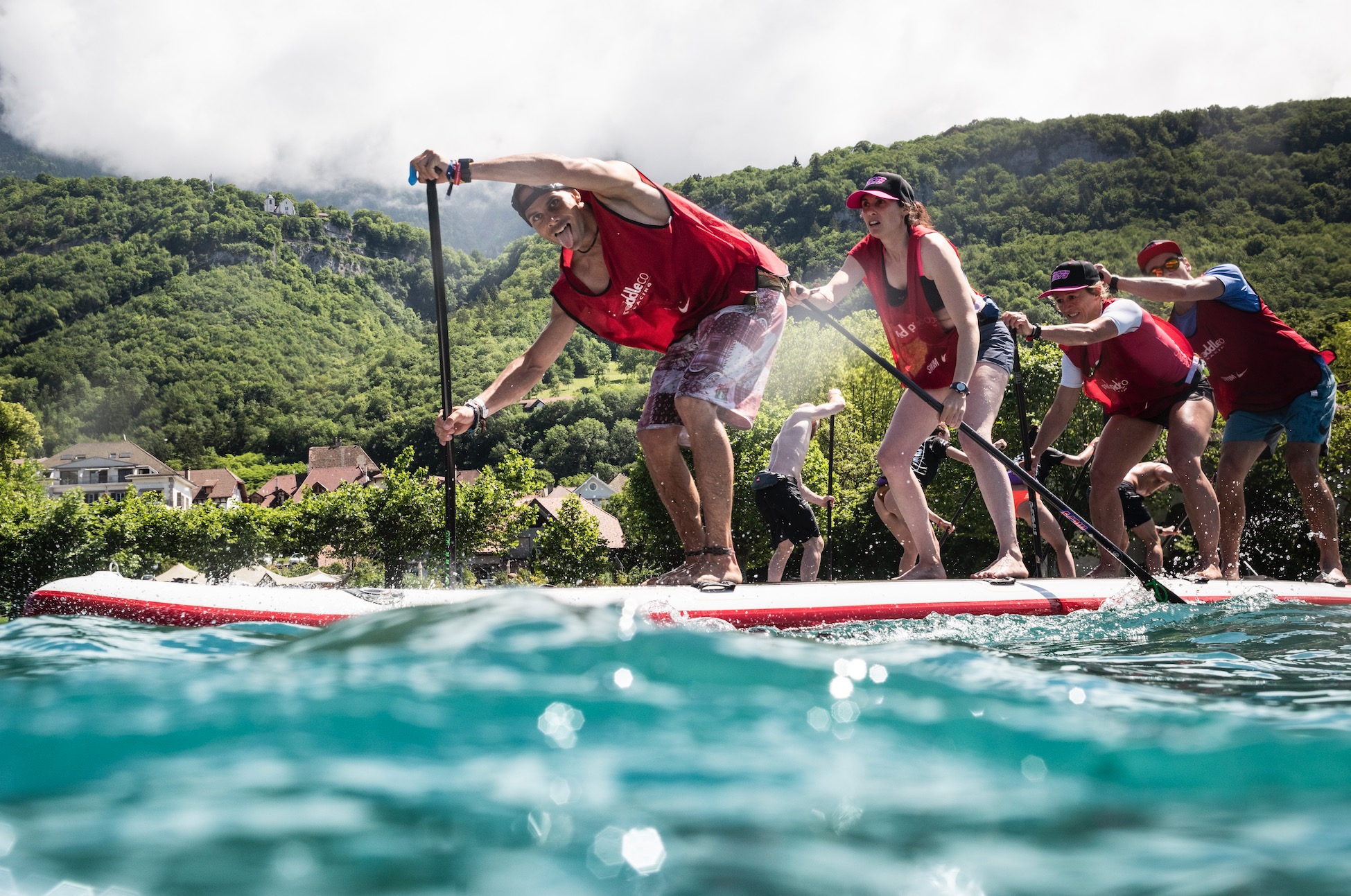 Day one saw teams, new and old come together for the initial race briefing with a chance to size-up the competition and check out the complex 600m course for the first time. ‘SUP Race Team Hungary’ last year’s champions, returned in full spirit ready to protect their title from the previous year by setting the bar high in the early rounds. Ladies, men’s and mixed teams all battled it out against one another, growing in confidence as they became accustomed to the conditions, kit and in some cases, their newly formed teams.

This caldron of team camaraderie, cultures and anticipation for the elimination rounds produced an electric atmosphere which continued off the water as the infamous ‘Daffy’s Gin Party’ swung into action with paddlers sharing stories and dance moves well into the night.

The following day teams were greeted by a magnificent fresh and clear morning. The sun rise turning the Lake Annecy waters to a mesmerising emerald green colour as over 180 solo paddlers gathered at the mass start line for the FAT and MINI-FAT races. Dragon teams watched on in support and respect as they turned their attention to the first elimination rounds in which they would be placed into their divisions, for their chance to be crowned Dragon World Champions 2019.

As the water settled from the ferocious action of the semi-finals, just four teams remained in the ladies and men’s divisions, whilst six would battle it out in the mixed final. A short break offered the chance for teams to rest and recover as the final FAT race competitors crossed the line after their mammoth endurance efforts as the Alpine Lakes Tour Kids and POP races got underway.

As the sun hit its apex in the sky, hundreds of spectators lined the shores of Talloires beach excitedly listening to the commentary announcing the start of the finals. This was the last chance for the teams to stake their claim at victory and they left nothing on the water. All teams exploded from the standing start and tore through the lake as their thrashing paddles whipped up the water. 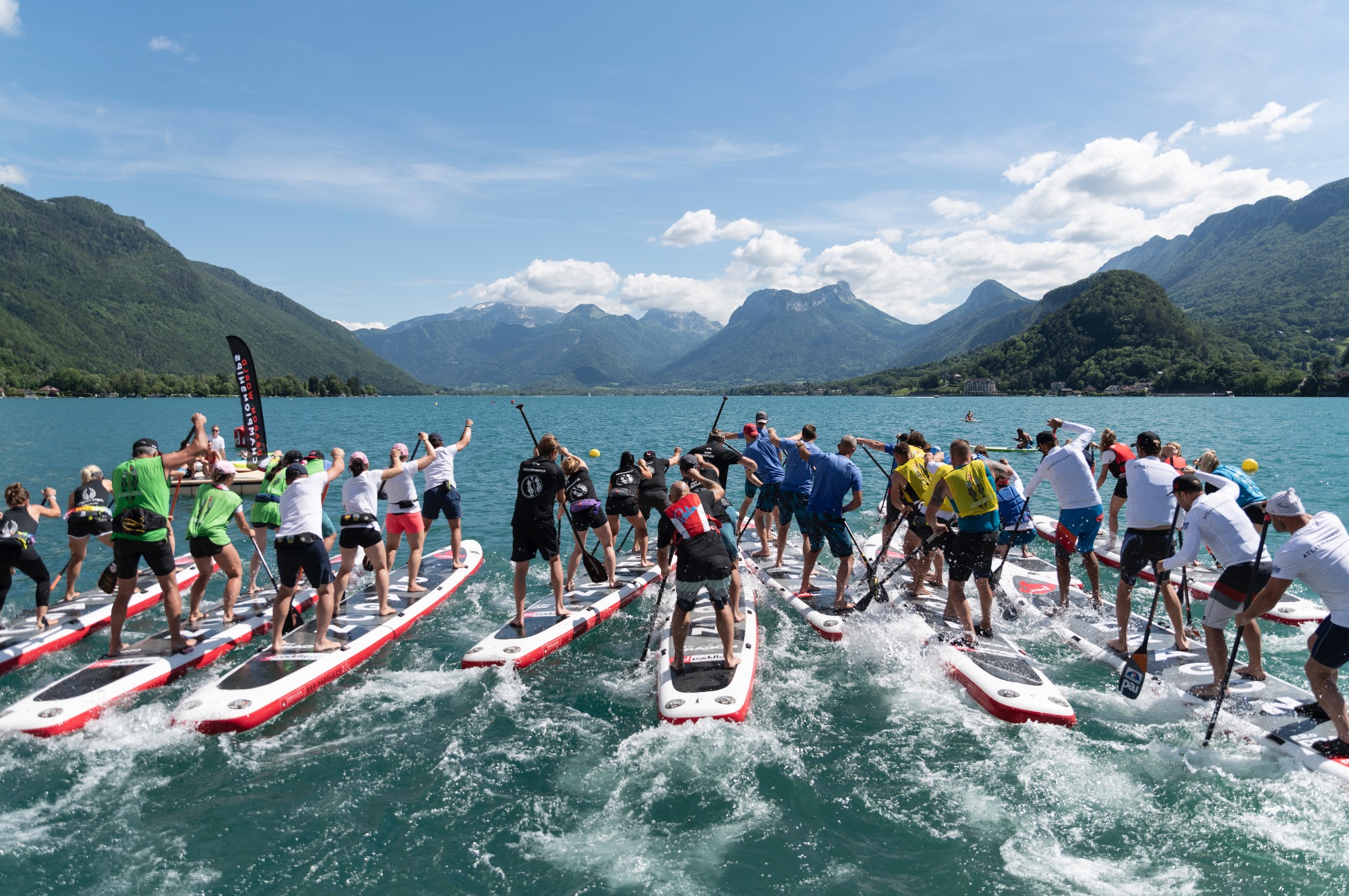 The closely fought ladies final saw the ‘Dragons Angel’s’ from France take victory, whilst in the mixed division it was team ‘Dragonfly’ from Latvia who secured themselves the title. The formidable form of ‘SUP RACE Hungary’ in the men’s division, managed to hold off a confident and powerful French team to take the championship title for the second year running. A super-final saw the top four teams from all divisions take to the water in a massive 12 team final in which all competed on a level field for overall bragging rights.

The final prize giving marked the end of the Dragon World Championships 2019 and also saw John Hibbard, Co-Founder of Red Paddle Co present the ‘Spirit of the Dragon’ award to the newly formed ‘English Roses’ who entered the event just a week before. This award is given to the team who embodies the event by putting as much energy into their racing as they do off the water, mingling with teams, sharing experiences and of course some of the last on the dance floor.

The Red Paddle Co Dragon World Championships is in association with Nike Swim and the Alpine Lakes Tour.

For all results please the table below: 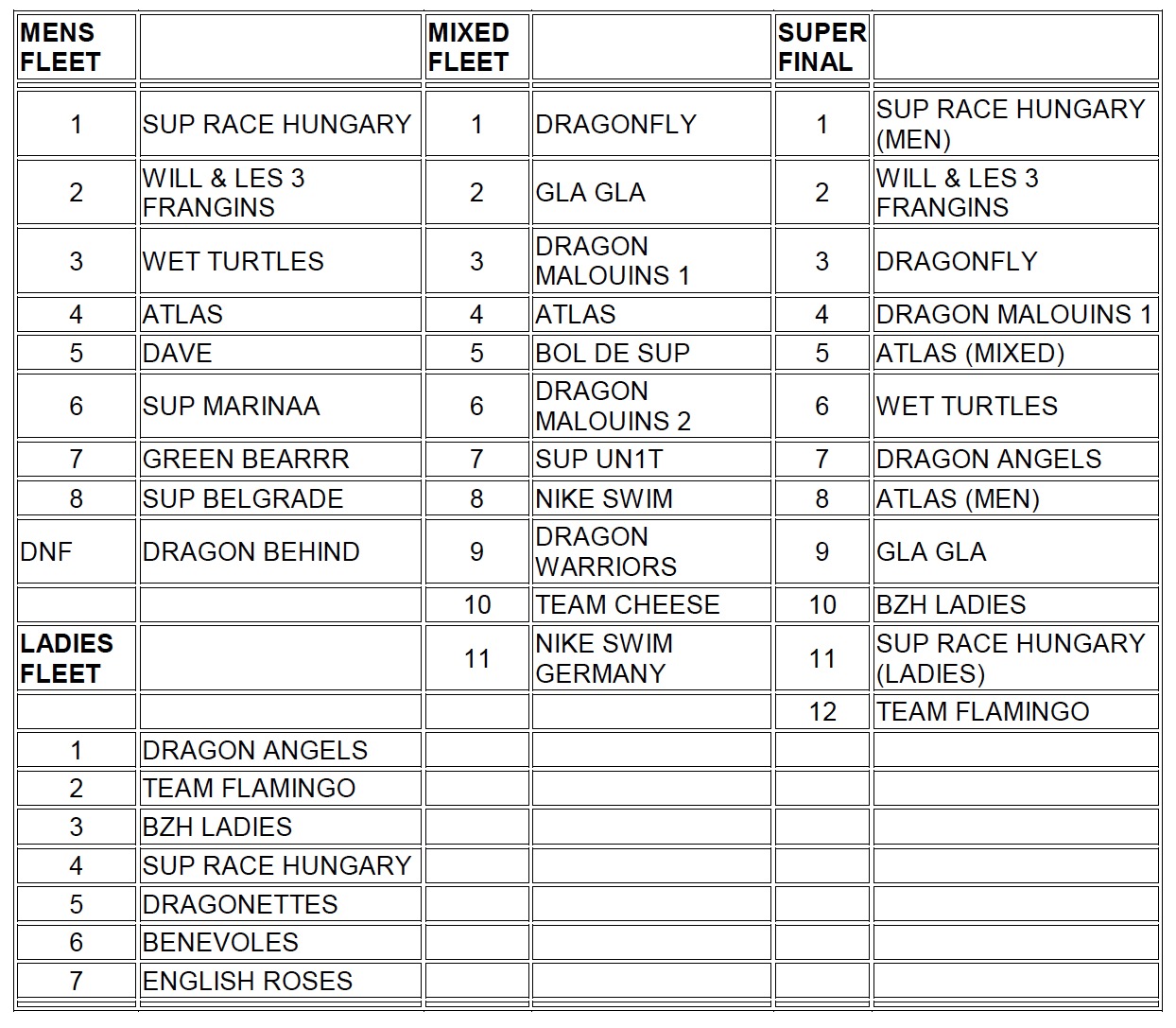 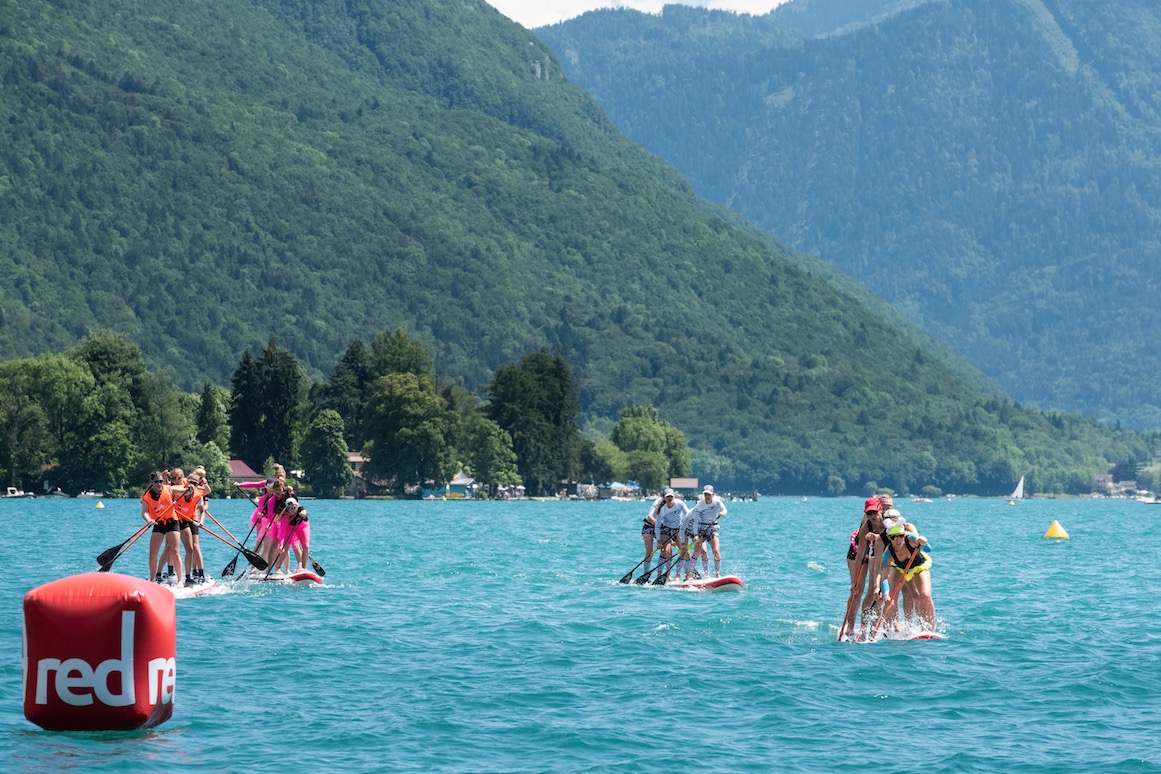