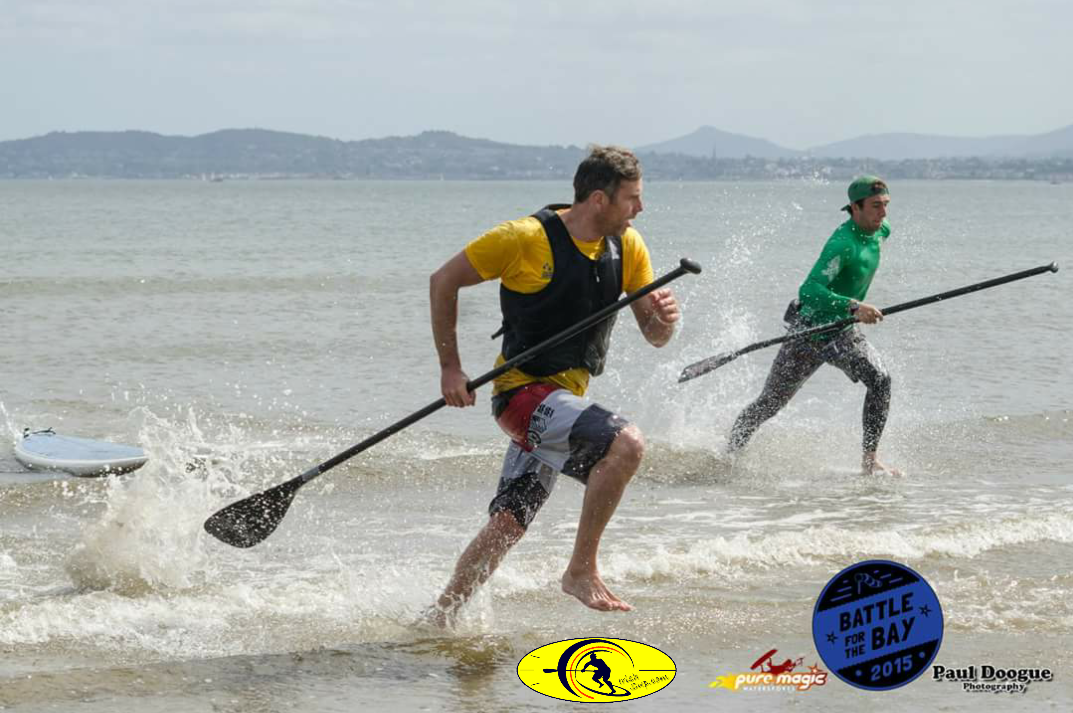 What an incredibly successful event yet again for The Battle for The Bay! Taking place on the shores of Dublin’s Dollymount strand and the Liffey River, Irish SUP Dublin and Pure Magic Kiteboarding held the country’s most popular SUP racing event for a second year in a row. Now into its 9th year The Battle for The Bay was the brain-child of the Colussi brothers, originally hailing from France and now based between Dublin and Achill Island. The event was designed as a showcase for Kitesurfing in Ireland and has historically attracted some major names from the kiting world. Last year the decision was made to incorporate SUP into the mix, as Ireland’s fastest growing sport it was recognized as an important ingredient to the success of a watersports festival like the Battle for the Bay.

It really is a watersports Festival like no other in Ireland, or indeed the UK. The Battle for the Bay provided the perfect mix of family, fun, action and professionalism and ultimately created an atmosphere of celebration for all water-sports people who took part. Paul Byrne of Irish SUP Dublin has long been at the forefront of innovation and development for all SUP disciplines in Ireland. He wisely saw a niche for incorporating SUP racing into the festival and has, yet again, managed to run a hugely successful event of world-class standards, putting Ireland on the map as a unique SUP destination. 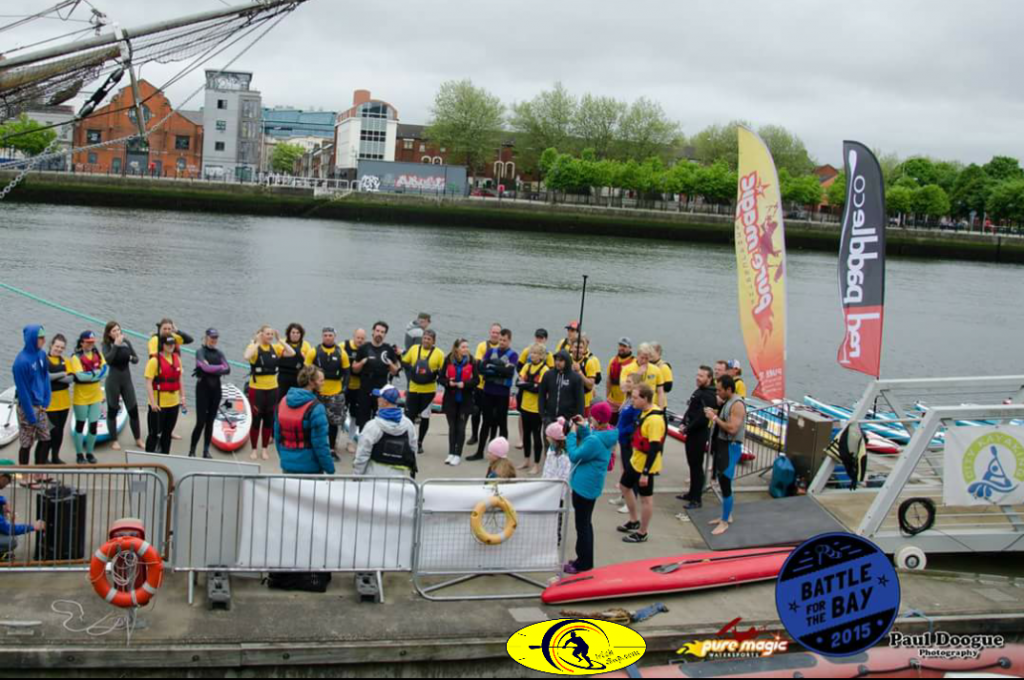 The Saturday kicked off at Dollymount with the sun shining and not a ripple of wind on the sea. The music was pumping and there were people of all ages taking part in the various beach activities and getting to meet and greet some of Ireland’s SUP and kiting athletes. The first race of the day was the lady’s Technical which ran a course of about 3km and would see the girls follow two laps of the course. The standard of Irish lady’s SUP racing has come on exponentially since last year when the vast majority of the women were total novices and only finding their ‘SUP feet’. Fast forward one year and the girls had been training on a weekly basis with Paul Byrne’s Irish SUP’s Race Series and had improved their paddling and rave skills ten-fold. The race took off just as the wind picked up to a nice healthy 25knots onshore and the battle began. Last year’s winner Katie McAnena led the field throughout the race but made a catastrophic error of navigating the course the wrong way and ultimately had to complete 3 laps instead of 2 which nudged her back into 2nd place. A strong performance from Sarah Gannon also saw her take the wrong course and unfortunately finish with a DNF. This set the stage for newcomer, young 14 year old Lucy Hamilton to show both her paddling and navigating strengths and take the lead coming home in 1st place and it was agreed by all that Lucy has a bright future ahead of her! A notable heroic performance was also put in by female paddler Orla Dooge, who despite the strong winds and challenging course, but on the bravest performance of the day. She took 2nd place in the cross-over board division behind Michaela Vonstein who’s training this Winter really paid off to help her take the win. The men then took to the course and were required to do 3 laps. Thankfully there were no fatalities of navigation in this round and all the men completed the course with strong performances from Irish power house Peter Kosinski and recent Irish Team paddler Keith Mc Guirk, fresh form his racing success at the Worlds in Sayulita. In the men’s cross over section saw Paul Kiernan take 1st and Neil O’Connell secure 2nd place.

And with that Day 1 was over and it was time to pack the vans and hit the tiles at the Generator Bar in Smithfield for the after-party! Needless to say the tunes were blaring and the beer was flowing and despite the call-time for 6.30am the next day the competitors still let their hair down and enjoyed the spirit of the festival. Flash forward a few meager hours and it was time for the weary eyed paddlers to meet at Dollymount to pack the team bus up and head into Dublin city centre for the inaugural Liffey Race. This was to be the first time a SUP race had been run on Ireland’s capital’s iconic River Liffey and the atmosphere was electric. History was made thanks to no small miracle pulled off by Paul Byrne who had to coordinate the logistical nightmare that naturally accompanies any water activity run in the heart of a city. But pull it off Paul did, and with such style! 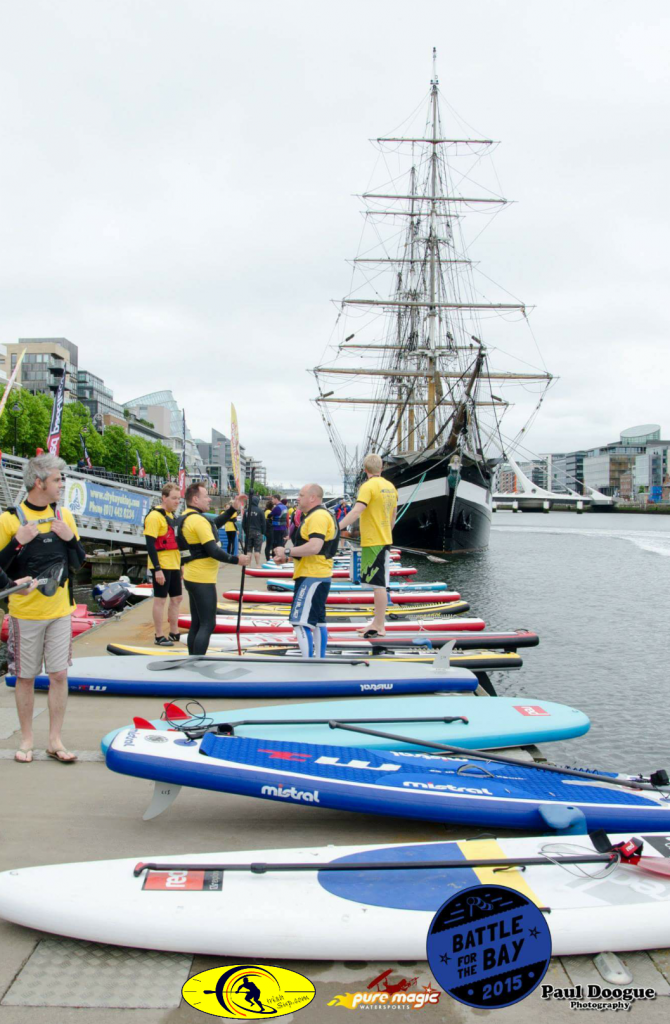 A huge gathering of paddlers donned their PFDs and stepped onto their inflatable SUP race boards to line up for the start of a very symbolic and iconic paddle. The competition was stiff, with pro paddler Peter Kosinski taking an impressive lead ahead of the pack but with Keith Mc Guirk hot on his heals. Mc Guirk never let Peter more than a board’s length ahead for the majority of the race and the 2 men set a hugely impressive pace as they battled upwind and upstream along the river taking 1st and 2nd respectively whilst Keith Gorman powered through to take the coveted 3rd place. In the ladies it was a battle royal between Sarah Gannon and Katie McAnena. Sarah’s background in rowing and Winter training was in full flight as she kept pace with Katie right until the half way marker. She then took the lead with Katie hot on her toes and both women paddling as hard as they could until the final stretch where Katie’s efforts to forge ahead and take the lead weren’t a match for Sarah’s strength and speed. Sarah took a 1st place with Katie in 2nd in probably the most tightly fought, memorable women’s race to date. Not far behind was Michaela Vonstein who paddled a solid and impressive race to take 3rd. The crowds gathered by the historic Jeanie Johnston Tall Ship and cheered the men and women onto the finish line. Everyone was buzzing from the atmosphere of paddling under the iconic bridges of Dublin city and turning the heads of passers-by who most certainly had never seen such a sight as scores of Stand Up Paddle Boarders cruising up and down their local river.

A few power bars and energy drinks later and it was back to Dollymount for the last event of the SUP festival, the Survivor race! Everyone was shattered at this stage and the notorious survivor race typically has most competitors broken out in a deep sweat even just looking at the course ahead. Both men and women lined up together, paddles in hand as Paul and Francois counted down to the sprint start down the beach. A ruthless recipe to narrow down the field saw 2 competitors being eliminated after every race. No major casualties were had despite the kung fu paddle wars and the women’s fleet was narrowed down to the top 3; Orla Dooge taking 3rd, Sarah Gannon taking 2nd and Katie McAnena using her land-sprint skills to take the win. The greatest shake-up of the day was seen in the men’s semifinal where Peter Konsinski was knocked out in a total shocker. His paddling is un-rivaled but the men were on a mission and unbeknownst to Peter were hot on his heels and past him in the final sprint run. This left 1st place wide open. A 2nd battle royal was witnessed as the men rounded the final buoy and in true nail-biting nature were neck and neck right to the dive across the finish line. Taking the win was Dave Owens who shone using his mix of paddling strength, race technique and sprint fitness to just pip the paddle powerhouse that is Keith Mc Guirk into 2nd place. The crowd loved it and it was the perfect showcase of the exciting and competitive nature of SUP racing to conclude the weekend’s festivities.

The prize giving got under way and Peter Kosinski and Katie McAnena took the overall wins bearing them the titles of Lord and Lady of the Bay for 2015. Titles which no doubt will be even more competitively battled for next year considering the meteoric rise in talent in Ireland’s female and male SUP racing scene.

Nice video summary of the entire event from Pure Magic