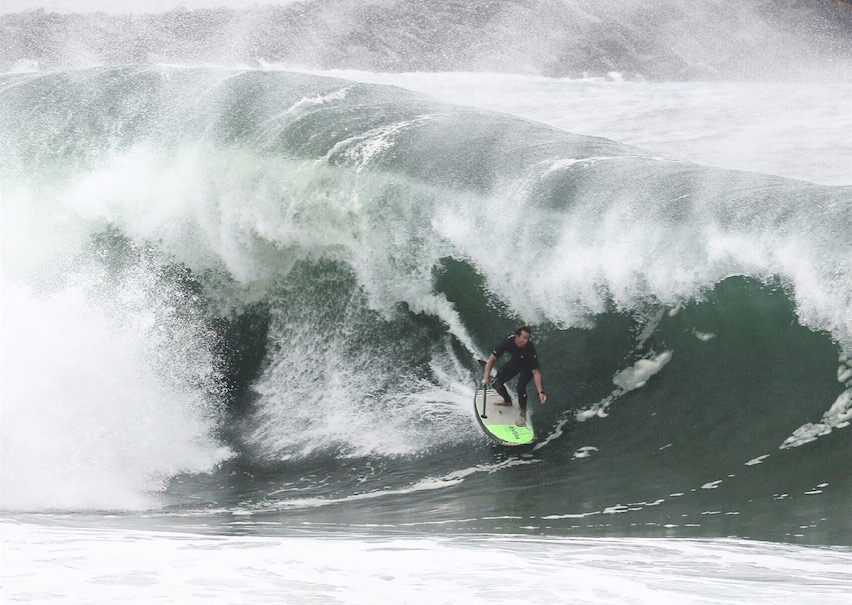 If any of you have seen the original ‘Endless Summer’ 1966 surf film you’ll recognise the quote… ‘The Wedge. The dirty old Wedge.’ The Wedge has been surfed for decades, but it’s still one of the meanest shorebreaks in the world, sucking the sand from the bottom and forcing it back down in a dirty, foaming, fat lip of a wave. It’s an impressive wave to watch, which is why crowds gather on the beach in California to watch the show when it’s on. Surfing The Wedge is for crazy locals only, and SUPing The Wedge is for a very select crew. Waterman and ‘Riviera Paddlesurfer’ Brennan Rose is one of the select crew who has braved this gnarly wave on a SUP. Here Brennan tells SUPboarder all about The Wedge wave, and his last big swell, SUP Wedge session on the 5th May… 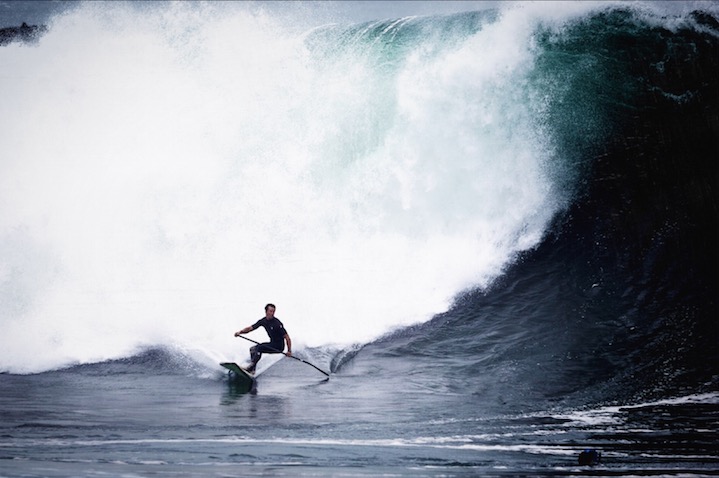 ‘The Wedge’ in Newport Beach California is down the street from where I grew up. I used to body surf, body board, and surf it as a grom. The Wedge breaks mostly in the summer on South / South West swells, and breaks right next to a jetty. When the swell comes in it bounces off the jetty to create the Wedge. The wave stacks up and usually breaks very close to the beach. Literally every wave you catch you’re hitting the sand. It’s a very dangerous wave, as I’ve seen and heard of many people getting injuries or getting paralysed out there due to the shallow waters.

Ever since I started stand up paddling 6 years ago I’ve wanted to SUP The Wedge. I waited for swell after swell after swell to SUP The Wedge. I didn’t want to go out there on a small day, I wanted to wait for a proper big wave swell. The atmosphere at The Wedge is tricky. The locals are very protective of who paddles out there. The Wedge is mostly a body board and body surfing spot. The past couple of years more and more surfers dare to conquer that steep drop. Most of the waves at the Wedge are close out gnarly barrels so it’s obviously dangerous.

That day The Wedge wasn’t property doing its thing, it was closing out 95 percent of the time. It was big, most sets were triple over head. All of my waves were close outs that I got smashed on. That day every wave I took off on was carnage but I kept looking for the gems. I paddled out late around 9 o’clock which only gave me an hour to surf. 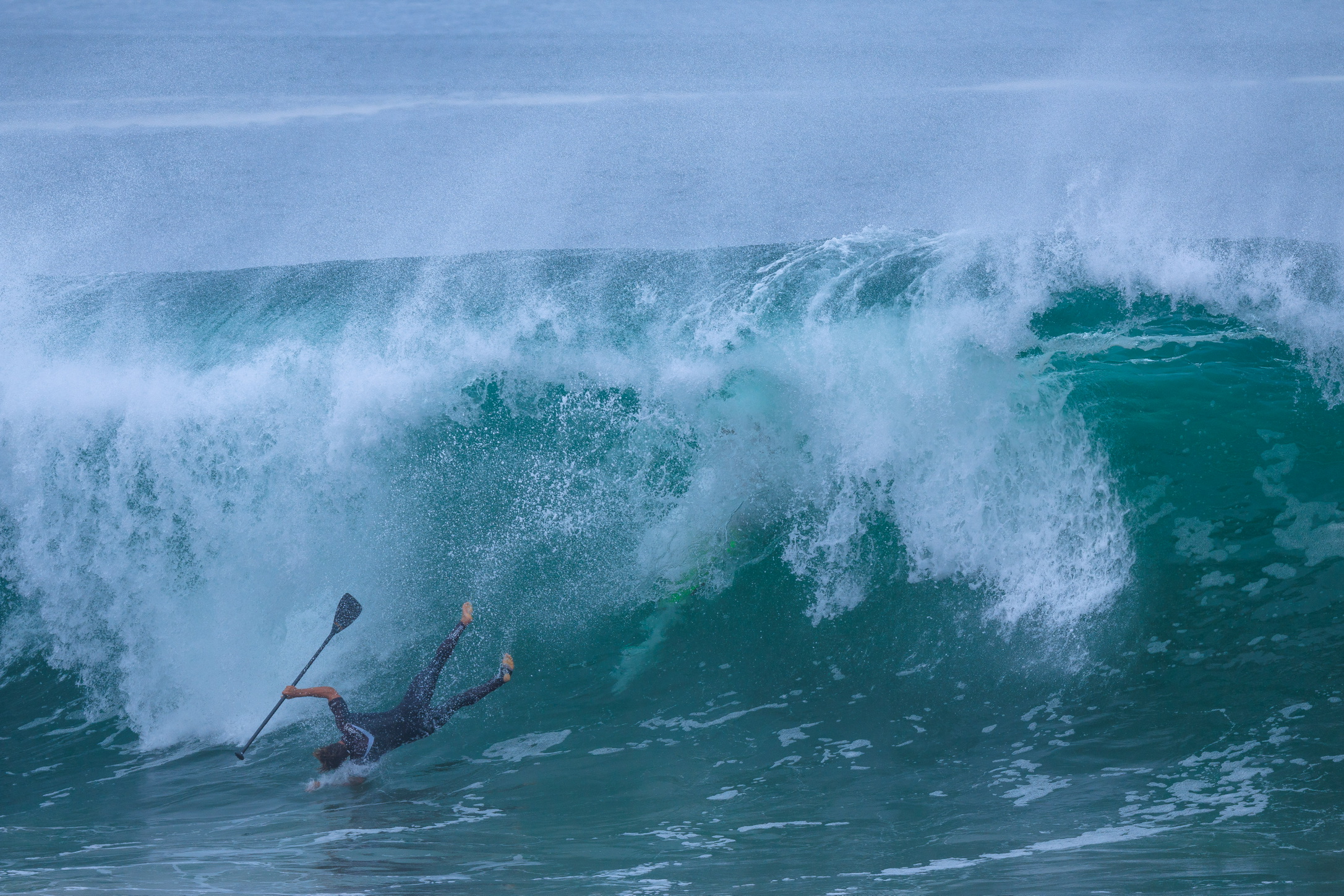 Since the injuries with hard boards they black ball it from 10am to 5 pm which sucks for us boarders but good for body surfers. I ended up breaking my board that day after my seventh wave. It was my first time stand up paddling The Wedge. While it was gangly and dangerous I will go back for more on a even bigger day! 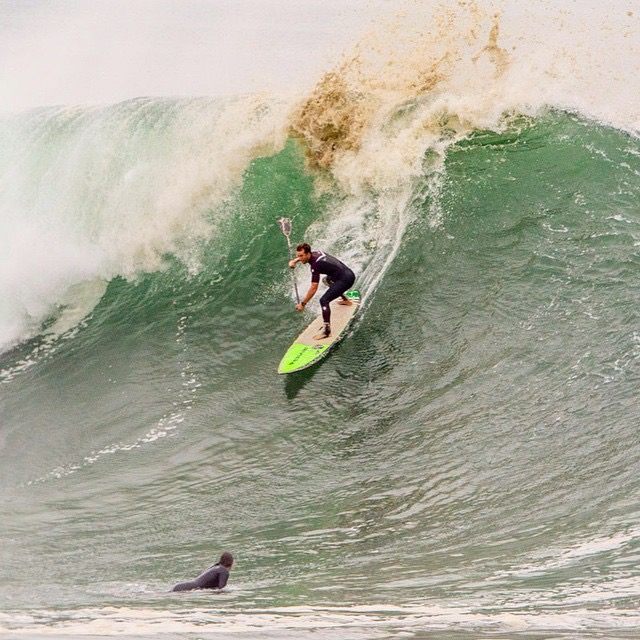 Check out the video below of that swell over the 4/5th of May at the Wedge. It give you a really good feeling for the wave and how mean it really is. Bodyboarders, surfers and one SUPer Brennan. Check out Brennan’s bomb of a wave at 2:30mins in… respect!

If you happen to be out in Cailfona when the Wedge is on. Try and get there to see it, live. Its amazing wave to watch from the beach because you’re so close to the action. It really will make you relise just how small we are in the grand-scale of things. And also be prepared to see a lot of carnage.

If you happen to be out in California when The Wedge is on, try and get there to see it for real. It’s an amazing wave to watch from the beach because you’re so close to the action. But be prepared to feel very small and insignificant! And to see lots of carnage!
Hopefully it won’t be long before we see Brennan out at The Wedge on an even bigger day! But until then you can see what Brennan Rose is up to on his website here.

From ’65-’69, mark’s the BEST time of my youth…at 15th St., The Wedge and Crescent Bay. The Wedge was “different” then as it seemed to brake much closer to the jetty, causing a more violent “double wave peak”. Went back in ’74 still a challenge to not eat sand while trying to kick out in 6″ of water! Funny they had to ban board surfing in ’94 during certain hours. When I was body surfing there, we used to say, “Adding a board to THIS break, was like adding a screw driver to a blender” Seeing the skill of today’s… Read more »

Thanks for your comment Gene. I bet it crazy how surfing and the boards we are riding have all changed. And the surfers attitudes have changed along the way too. I would of loved to of seen a day in 69. Thanks for the share, Reuben