They had a great day of racing today including a Nakama Kai Surf Contest and exiting new Nations Cup.  Yet all the attention was focused on the final day of racing for the Stand Up World Series Huntington Beach Pro 2014.

What a day of Race action they had on Day 5 of the Huntington Beach Pro GrandSlam. Check out the highlights as both male and female athletes from across the world battled each other and the intense shore break to take the Stand Up World Series Sprint win. 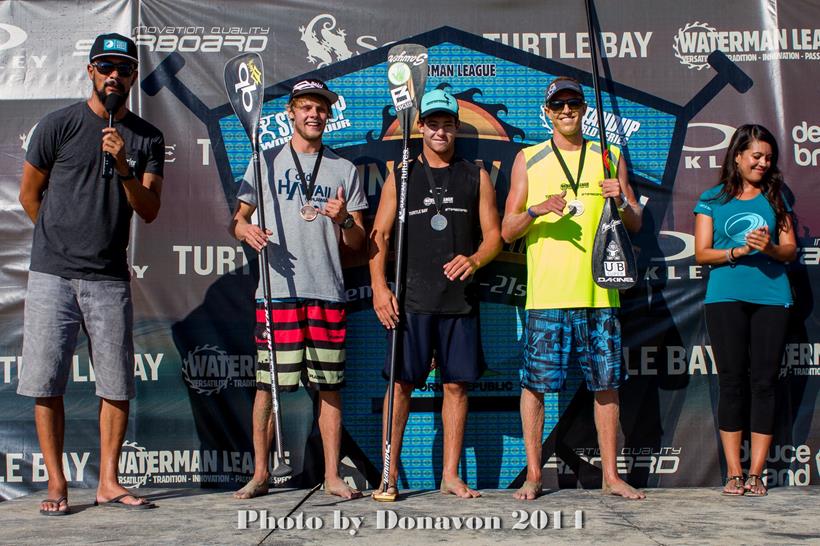 Current Ratings Leader and yellow jersey holder, Connor Baxter (Starboard) started today as he means to continue here at Stop 4 of the 2014 Stand Up World Series, securing a win on the first day of competition in one of the most exciting Sprint Racing eliminations yet.

A stacked field saw intense heats throughout the day as the athletes battled for position and against the set waves for a dramatic showcase of Stand up paddle racing at its very best.

Connor played it safe through the opening rounds, just making sure he made it to the final. However, once there, it was all out, as his sprinting game and strategic tactics came into play as he was able edge fellow competitors off a set wave that came through on the first inward leg, allowing him and Mo Freitas (Focus SUP) to take the lead.

A battle into the finish then ensued with the Dane Casper Steinfath in the mix too, but a clear shot through the chute to the finish line secured the win for Connor, as Mo stumbled and dropped his paddle, and Casper came off in the shorebreak.

Make sure to check out the highlights from today and join us LIVE tomorrow for the World Series Long Distance, as Connor will be shooting for not only the event win, but the World Title. With 2 wins under his belt, a 3rd win would close the deal for Connor, enabling him to win his first World Title in advance of the Final event at Turtle Bay. Watch the Long Distance all go down LIVE from 12pm tomorrow at www.watermanleague.com 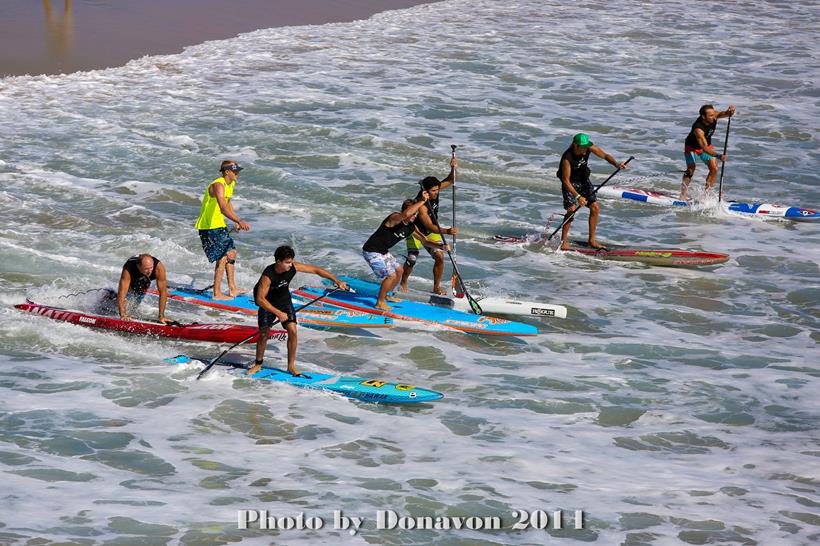 Mo Freitas (Focus SUP) is having an incredible event here at the Huntington Beach Pro Grand Slam, with a 3rd place finish in the Surfing and now putting on an impressive performance in the World Series Sprints, battling with Connor Baxter (Starboard) until the dying seconds of the final to secure a well deserved 2nd place today.

Given the nature of the Long distance Race tomorrow, Mo has to be considered one of the favorites and is looking strong coming into the second day of competition. Casper Steinfath (Naish) is clearly on a high after winning the European TItle this year and coming into the back end of the season with momentum and confidence. This showed in abundance today, as Casper stepped up to battle it out with the best of the best and come back from behind in the last two legs to battle with Connor Baxter (Starboard) and Mo Freitas (Focus SUP) to the very end.

Casper is a warrior and loves a challenging paddle, so tomorrow’s long distance consisting of 5 laps coming through the surf each lap will suit him well, as he will look to move up in the overall World Rankings in advance of the World Series Finals at Turtle Bay. 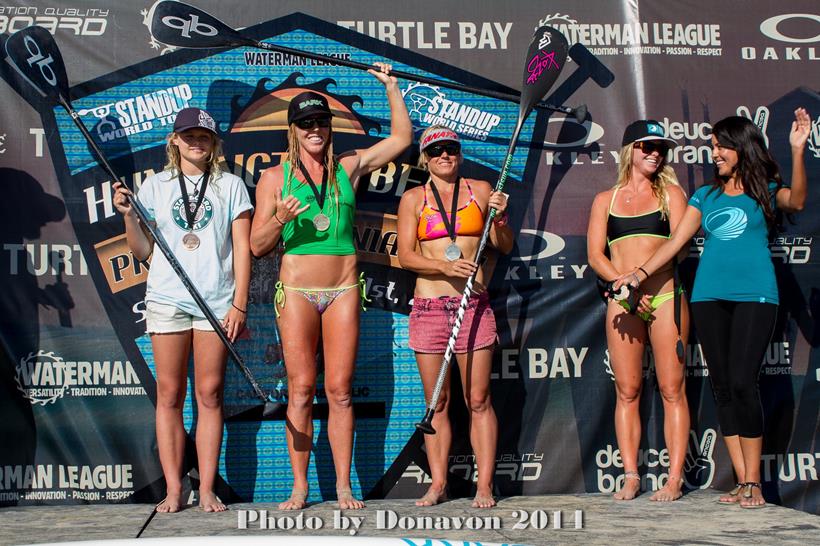 Fresh off an impressive performance in the Stand up World Tour event this week, Candice Appleby came in today energized and confidant.  After dominating her Opening heat, she never looked back and remained unbeaten right up to the final.

The 28 year old Californian showed real knowledge of the shore break to find the best lines throughout the ‘M’ shaped course. Using her strength to the battle through the sets and then making sure she set herself up round the buoys to ride the bumps into the beach.

Despite the phenomenal international athletes from all over the world making up the final, Candice held her own. With some strong sets hitting the beach, right by the pier here at Huntington Beach, she once again showed determination and skill to cut through the shore break and get out into clear water in the leading pack.

After rounding the beach break buoy still right up in the leading  Picking up a bump almost straight off the turn back to the beach she was able to break away from the pack and cross the finish line in first place. A fantastic result for the American who will be full of confidence going into tomorrow’s Long Distance race. 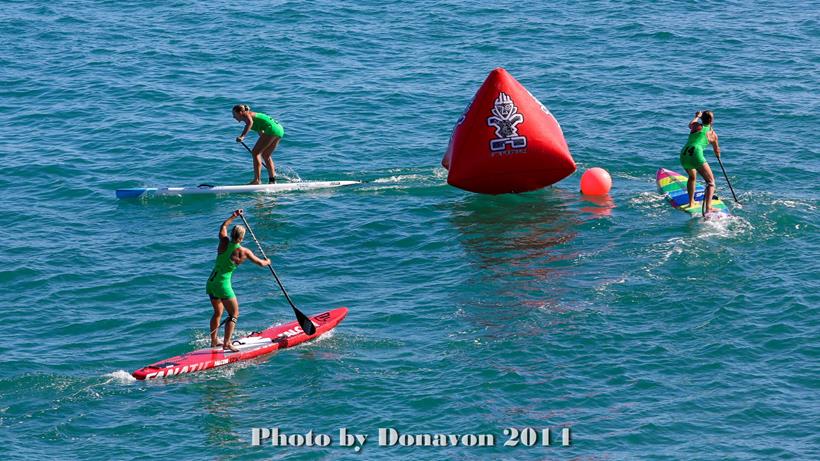 Angela Jackson (Fanatic) looked confident throughout the opening day, coming off a win in the Chigasaki Pro in Japan last month. Powering through her first heat and coping well with the conditions she was worthy of her place in the finals.

Despite having to play catch up after a heavy start with the dumping shorebreak, Angela was able to catch up and battle her way back into second place behind Candice. This result will be a confidence booster coming into the final day of action here in Surf City USA, as she will be gunning to regain the World Ratings lead after Stop 4 of the 2014 World Series, something she is in a far better position to do after today. 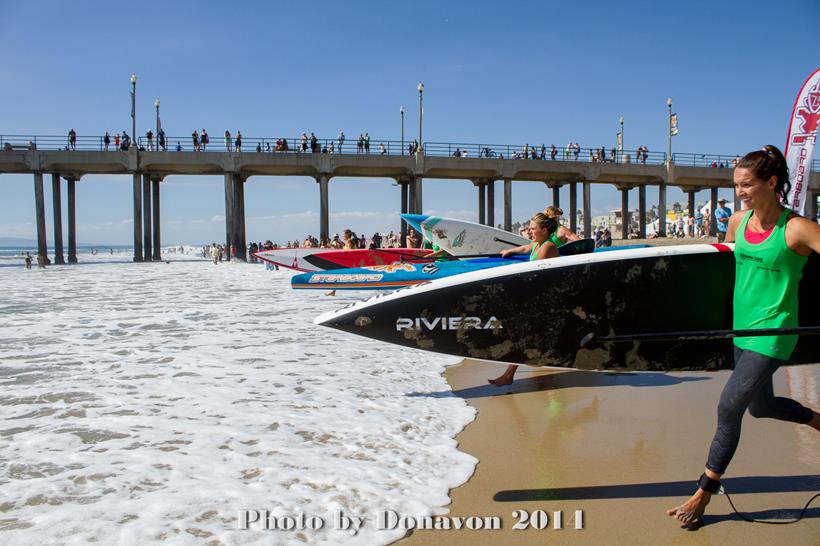 Keale Dorries (Starboard) the young Australian was 3rd after showing real composure in the waves and under the pressure of being in this prestigious World Series event.

She was in the leading pack throughout the finals and proved that she has what it takes to take on the best of the best. She held 2nd for much of the race, only to be overtaken by Angela Jackson (Fanatic) on the final leg, but fending off a strong challenge from Oregon’s Fiona Wylde.