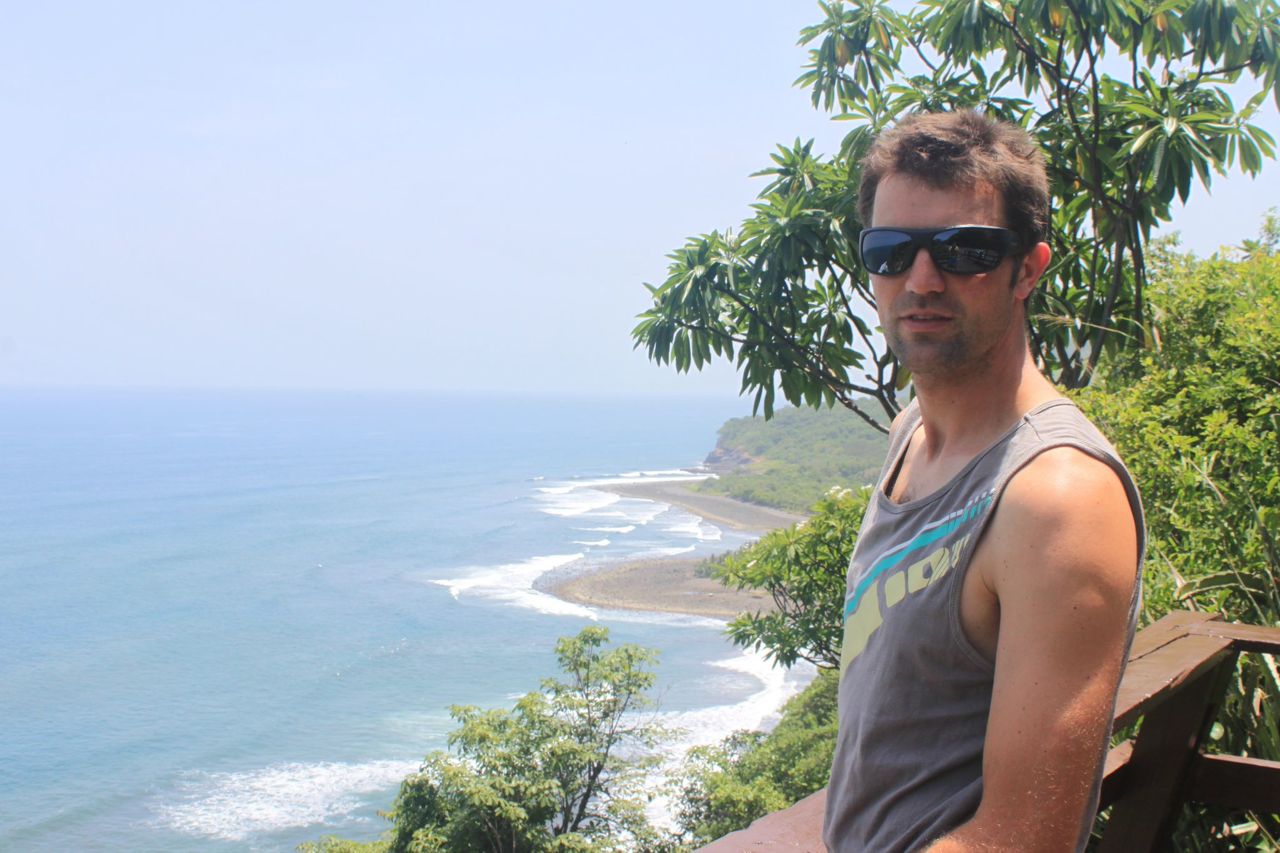 “Mista, Mista! What have you got in the bag?
A body.
It’s a really tall body.
They died on the rack.
Some passengers on the bus laugh.”

From door to door, I was in transit for 20 hours from the UK to Central America, which is actually less time than it took my second niece to get from Newcastle to Mid Wales on the Mega Bus.

My long time friend Dafydd (yes, he is Welsh) met me on the other side of the Atlantic from the UK, in Guatemala City and we headed straight for the West coast.
As we dropped from the higher altitudes where  Volcanoes lay both active and dormant, we encountered  the increasing heat, along with the density of the lush trees, and greenery as we neared the coast.
In an attempt to acclimatise we resisted the A/C and kept the windows open, and so the great sweat began.

Accommodation options were plentiful and we stayed in one of the numeroussurf camp lodges. Prices varied from $10 a night to $150, depending on what you want, and we stayed at a lower priced place right on one of the breaks. Again no A/C as by now, we considered ourselves acclimatised, even though we weren’t.

We were surfing mostly right hand waves, back hand for me, and a good opportunity to work on what is generally considered the more technical side of Stand up paddle surfing.
The wind would tend to pick up in an onshore direction as the day progressed, due to the rapid heating of the land in comparison to the sea (a common occurrence in the tropics), but for our visit it was generally light offshore until about 9am (meaning a wake-up time of 4.30 was mandatory to make the most of the clean conditions) and would remain agreeable until about midday.

We found a break which had a little Cantina set up right on the beach, serving fresh coconuts, fried bean breakfast, and a fish lunch.
We would normally head there, meet our local purveyor of sustenance, agree a time to eat, and then paddle out for a surf. On our return we would be met by a hot breakfast and a steaming pot of Central American coffee:  As Dafydd rightly said-

“It doesn’t get much better than this”

The main wave we surfed, we called 40’s. It had a wide bay to the side that gave us a great channel to access the break. Long peelers, with a few barrel sections, gave very forgivable waves, and a high wave count.
We rarely shared the waves with anyone, and were told by the locals that there would normally be a few Brazilian visitors, but as of the recent World cup, they had seen a decline in the presence of their South American brothers.

The water temperature was the warmest water I have ever suffered or surfed in. At about 28C it was very hard to keep cool.