The final day (day 3) of action from the Wadi Adventure Wave Pool in Abu Dhabi. 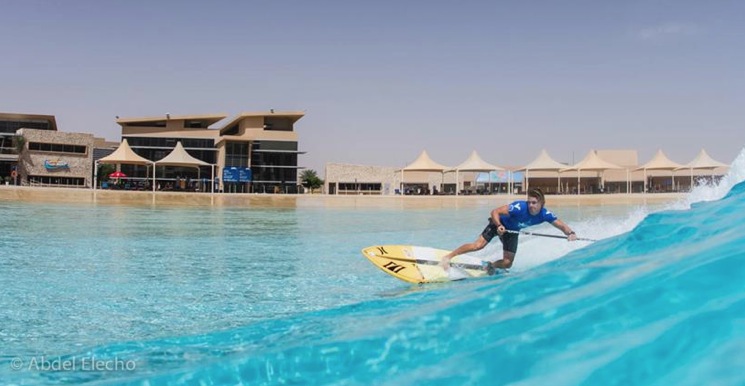 It was another full and dramatic day of action today at Wadi Adventure Park in Al Ain, for the 2nd day of the Abu Dhabi All Stars. With a warm up session for the women to kick the day off, it was straight back into Men’s Round number one, as we picked up with Heat #13 through 16 to complete the first round of action.

Some stand out performances through the completion of Round 1 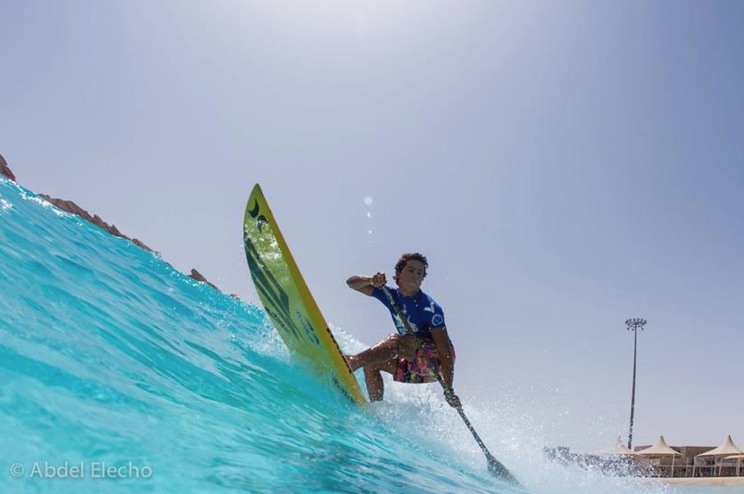 Stand outs from these last 4 heats of Round 1 were Beau Nixon (Naish) from Australia, using his powerful surfing style to advance directly through into Round 3, but also Kai Lenny (Naish) from Maui, 3 x World Champion, who put on a flawless performance in his first round heat to match Sean Poynter’s (Starboard) highest heat score total for round 1 to tie atop the 1st round Leaderboard.

Women’s 1st round sees strong performances across the board 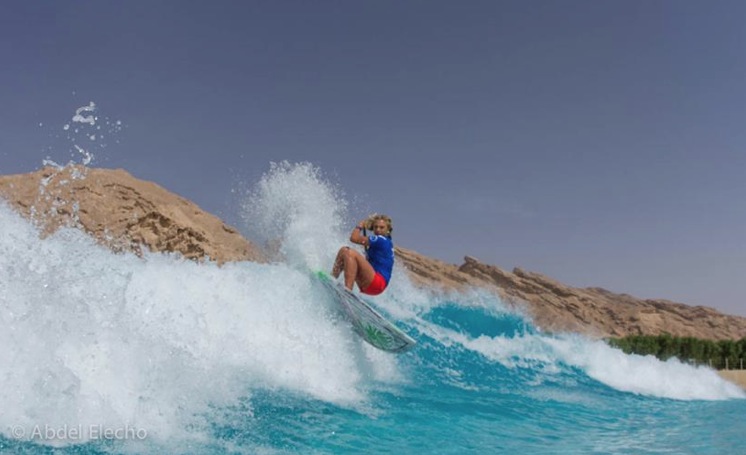 It was then straight into the 1st round of the women, as we saw current World Champion and ratings leader Nicole Pacelli continue with her great form this year, with another strong opening performance here in Abu Dhabi, securing the highest heat score total of the first round. Other standouts were fellow Brazilian Aline Adisaka (New Advance), but also Brazil event winner, the young Floridian Izzi Gomez (Starboard) who is seemingly unstoppable right now here on the Stand Up World Tour. Izzi has won 3 out of 6 events so far on the Stand up World Tour: a pretty impressive record by the young Floridian! 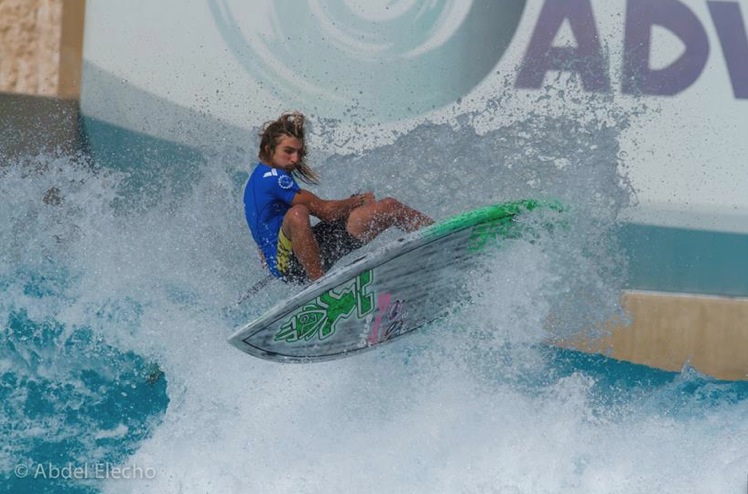 The repechage format created a sudden death scenario that provided an exciting extra twist to the event, but that also provided another chance for riders to break back into the running if they fell short in the first round. With 10 heats of 2 athletes (total of 20 athletes), all vying for 4 spots in Round 3, the pressure was on for the contenders to step up their game and put it all on the line for the glory today in Abu Dhabi.
Stand outs in the Repechage round were Giorgio Gomez (Starboard) from Florida, Daniel Hughes from Huntington Beach California and Connor Baxter (Starboard) from Maui, with Remi Quique (F-One), making the final slot advancing through into Round 3 with a solid performance here at Wadi Adventure Wave Pool. 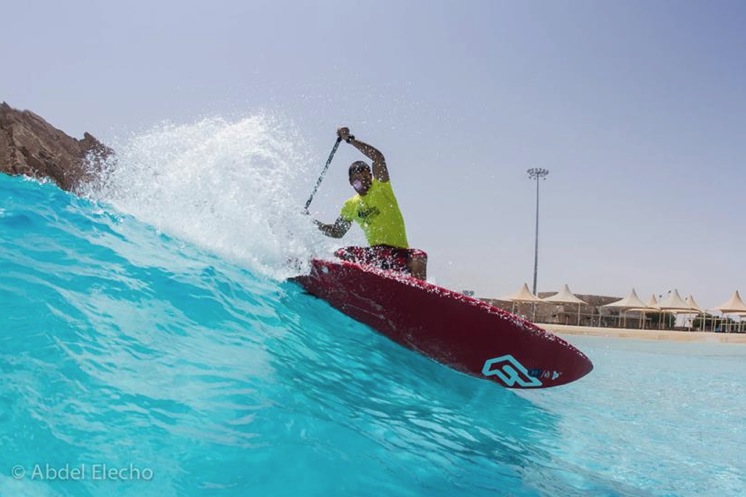 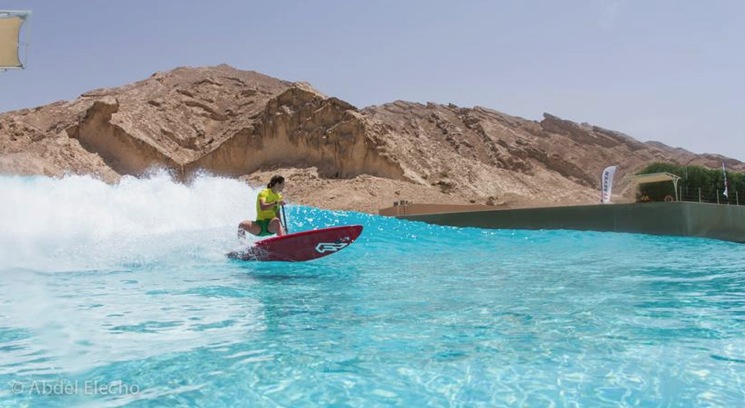 With the Top 16 now confirmed, we then went onto decide the final 2 women athletes who would go on to join the Top 6 that had already advanced in the quarter-finals. In the end it was to be Sophia Bartlow who put on a dominant performance and made the cut, followed by the Abu Dhabi All Star from 2013, Olivia Piana (Fanatic) from France.

Round 3 gets off to a flying start, with the first half already complete 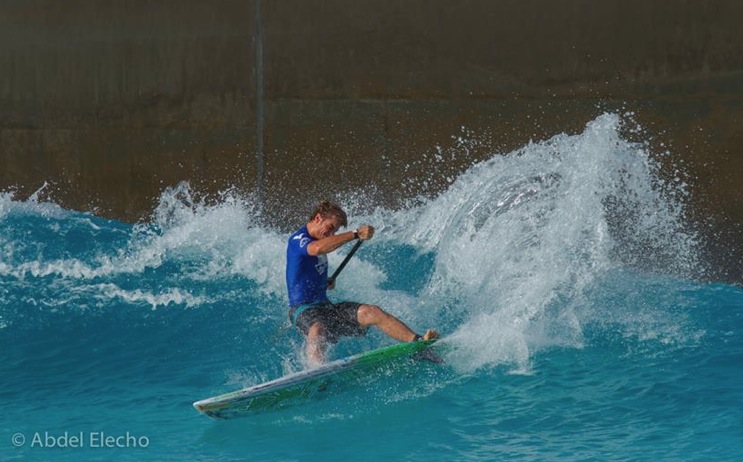 It was then straight into Round number 3 for the Men as the sunset and a beautiful evening settled in here at Wadi Adventure Park. With stacked heats from start to finish in this Round of 16, the action was red hot from the outset:
Sean Poynter (Starboard) kicked off the Round in style posting a 7.2 and 7.8, winning his first Man on Man showdown to advance onto Round 3. In the 2nd heat, Zane Schweitzer (Starboard), Abu Dhabi All Star Champion from 2013 followed suit, with a high score of an 8.5 and heat score total of 16.3 – an impressive performance from the young goofy footer from Maui. Sean and Zane will now meet in Quarterfinal #1.

The Salazars go down, while Mo Freitas and Ian Vaz step up to be counted 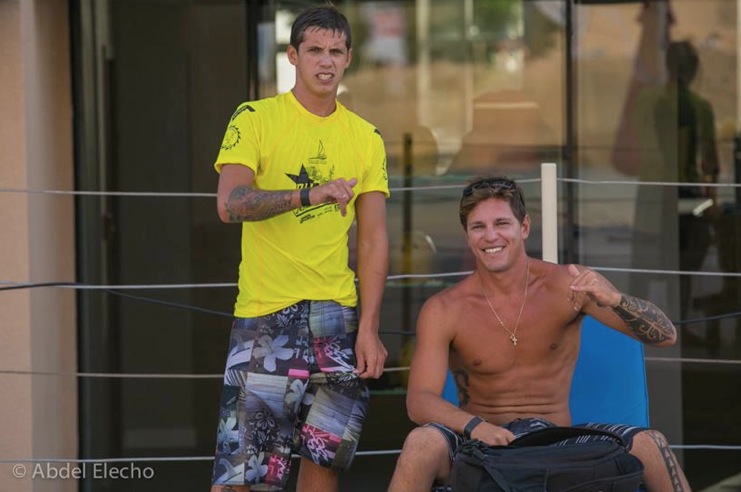 The next heats saw the Brazilian contingent face off, with half Brazilian Mo Freitas (Focus SUP) joining the mix up against 2012 World Champion Leco Salazar (New Advance) in heat 4. Meanwhile in heat 3, it was Matheus Salazar (New Advance) up against Ian Vaz (Art in Surf).
After a stellar first day for the Salazar family on Day 1, it was to be the end of their run, as Ian Vaz linked together some phenomenal turns to take the win in his man on man showdown against Matheus and Mo Freitas, fired all cylinders to post a series of high 7s to take the win in his heat. This heat brought back memories of the epic Ubatuba Pro Final of 2012, where we saw Mo Freitas coming back from a seemingly impossible position to take the win over Leco in the dying minutes of the Final with a 9.7.
Mo Freitas (Focus SUP) will now face Ian Vaz in the Quarterfinals, so make sure to join us tomorrow at www.watermanleague.com LIVE from the Final Day of action here at the Stand Up World Tour component of the Abu Dhabi All Stars Grand Slam.

The second day of competition here at the Wadi Adventure Wave Pool.

The full day 1 of competition at Wadi Adventure Wave Pool. 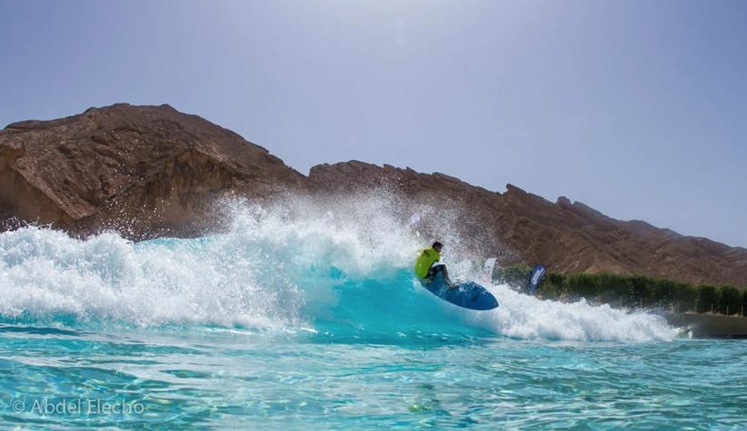 The Stand Up World Tour Surfing component of the Abu Dhabi All Stars Grand Slam got underway today with the first round of the Main event for the Men, and warm ups for both Men and Women.The scene was set for a day of insane action with the unique backdrop of desert complementing the star of the show, the bright blue pool found at the base of the mountains at Wadi Adventure Park.

Stand Out performance from Day one 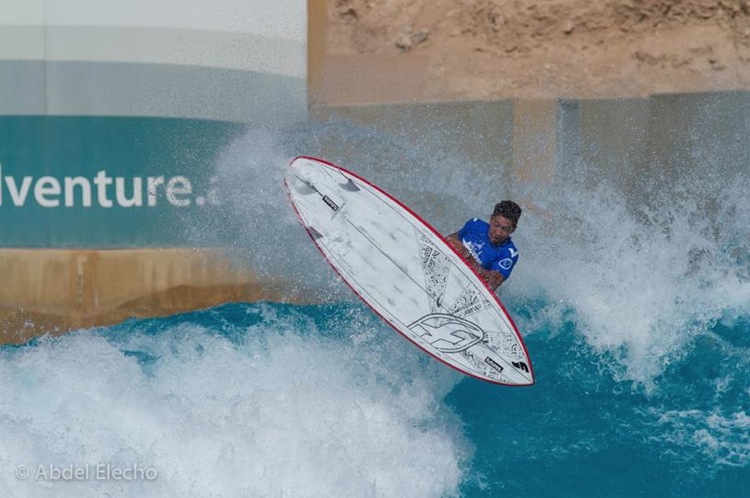 Caio Vaz (Art in Surf), current Ratings Leader on the Stand Up World Tour set the tone for the day, notching up a 7.8 and an 8.2 for a heat score total of 16.0. A great start to his event campaign.
The next standout came in the form of the young Tahitian Poenaiki Raioha (F-One), obviously feeling the Mana of his fellow Tahitian’s victory (Michel Bourez) over in Western Australia, to post a phenomenal 7.7 and 8.5, for a heat score total of 16.2. 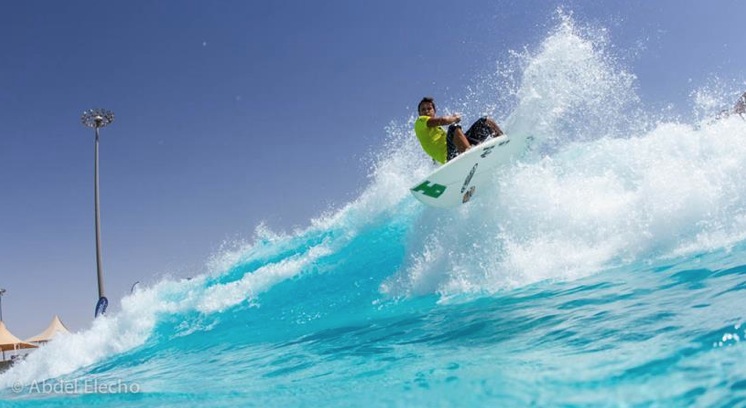 Sean Poynter steps up to be counted, as do Keahi de Aboitiz and Kody Kerbox 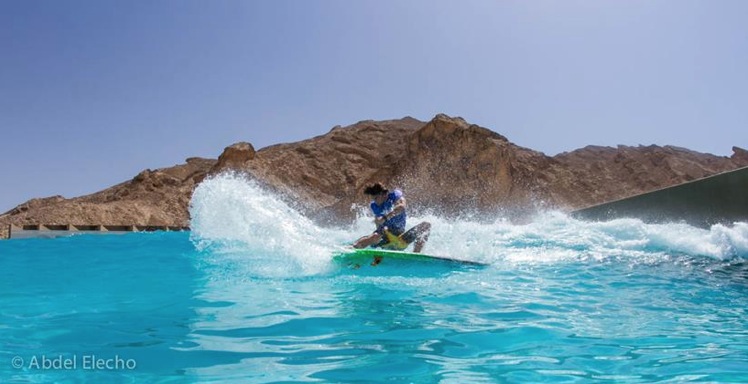 However, the tables were turned, when Sean Poynter (Starboard) took to the water in Heat number 10, as despite a slow start on the lefts, he hit all cylinders on the right, with the highest wave score of the day of a 9.2. Backing that up on the closeouts with an 8.0 boosted Sean to the top of the leader-board with a total heat score of 17.2.
The final two heats also saw some great action, as Keahi de Aboitiz (JP Australia) put on another strong performance here at Stop 3 of the Stand Up World Tour in the UAE, posting a pair of 7.7s for a heat score total of 15.4. Similarly, Kody Kerbox (Naish) put an exclamation on the day with a final closeout wave scoring him an 8.3, which when combined with his 7.1 high score for his rights gave him a heat score total of 15.4. 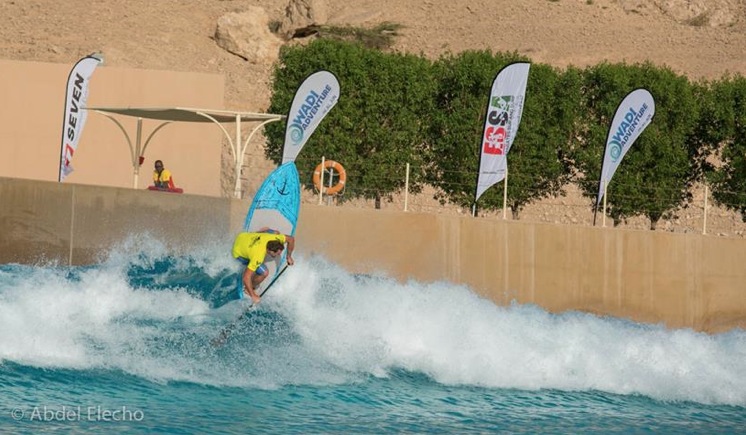 The riders opted to go for a Repechage format for this event, that differs to the normal repechage set up, with the Top 12 highest scores advancing directly through to Round 3 and the remaining 20 athletes going into a Sudden Death / Repechage Round to fill the final 4 spots. This Repechage round will feature only closeout waves, with each rider getting 4, and their best 2 scores combining for their heat score total to determine whether they qualify or not. So a lot of tension mounting here in Abu Dhabi as we prepare for the second day of action at the Abu Dhabi All Stars.

So all in all, an action packed and exceptionally high scoring day of action here on the Stand up World Tour, as the performance level has once again gone to a whole new level, and the very best in the world of showcased what they are capable of. With each and every rider vying for the best scores possible right from the outset, no-one gets an easy ride to Round 3, as all the athletes have to put it all on the line to make it through to Round 3.

You can also check out the current leaderboard from the event, subject to change pending the scores from the Final 8 Riders of Round 1 by clicking here 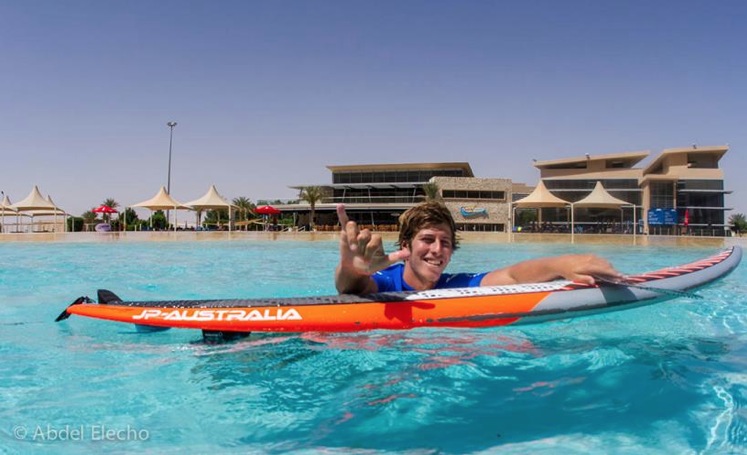