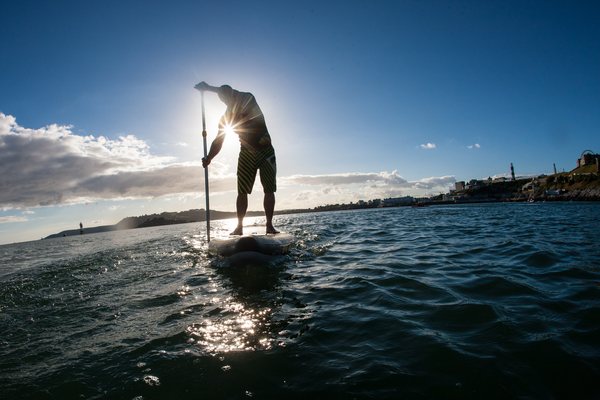 Last weekend the ‘Ecover Blue Mile’ event took place in Plymouth. The Ecover Blue Mile is a mass-participation water sports event designed to encourage greater care of our blue environment. It was launched in 2010 as a flagship event and has expanded to over 200 grassroots events around the UK. Stand Up Paddleboard racing and demos over the weekend meant there was the opportunity for everyone to get on the water… competitive or not!

The winners of the Naish SUP Race were;

Read on for the full ‘PRESS RELEASE’

Olympic gold medallist Tim Baillie was in top kayak and SUP form at the 2013 Ecover Blue Mile in Plymouth, delighting fans who lined the city’s waterfront to see him take on all-comers.

Tim was scheduled to be competing in the World Championships on the weekend of the event on 14-15 September, but he and C2 canoe slalom partner Etienne Stott had to withdraw after Etienne suffered a shoulder injury during the summer.

Tim took part in the Ecover Blue Mile with his wife Sarah, herself an international canoeist for Canada. And the couple made it a 1-2 in the Fatyak Kayak race, with Tim just pipping Sarah to the finish line!

The Naish SUP race was won by Phil Ellery from Cornwall, with Tim finishing runner-up. Tim admitted that he wasn’t as familiar with sit-on-top kayaks or SUP boards as he is with his canoe, but that the two sports were great fun.

It was also an experience for the enthusiasts who got to compete against an Olympic champion. In all, 16 raced in the SUP event and a packed field of 22 hopefuls took part in the kayak race.  Jayne Blundell of Fatyak Kayaks, who provided the kayaks for the event, said: “It was great to see so many of our boats out on the water. We had brilliant weather for it on Saturday and it was lovely to have so many people come down to the event.

“Tim Baillie spent some time with us at our stand in the event village, which was brilliant, and he chatted to everyone and showed off his Olympic gold medal.

“We also had great feedback from people who took the boats out so it was a great success and we look forward to it again next year.”

As well as supplying the kayaks for the event, Fatyak Kayaks also donated two of their boats for prizes, including one which was auctioned at the Ecover Blue Mile Gala Dinner to raise money for the Marine Conservation Society.

The Ecover Blue Mile circuit starts near the famous Mayflower Steps on Plymouth’s Barbican and heads out into Plymouth Sound, before finishing back at the Barbican.

With heavy rain and high winds forecast for the second day of the event on Sunday 15 September, all the major water sport events were switched to the opening day on Saturday, making for a packed day of action on the water.

A record number of entrants signed up to take part in this year’s Ecover Blue Mile, which was raising money for the event’s charity, the Marine Conservation Society. Almost 300 people swam or paddled the course.

Thankfully, the sun shone on ‘Super Saturday’ as the mix of enthusiasts and serious competitors took to the water.

With the main events all taking place on Saturday, there was an opportunity on Sunday morning for people to take part in SUP and kayak taster sessions, with a £2 donation to the Marine Conservation Society. The predicted rain then duly arrived early on Sunday afternoon.

Conrad Humphreys said the event had been a huge success: “To see so many people enjoying the water was just great! I’d like to congratulate everyone who took part – they’re the stars of the show. And it was brilliant to see so many (64 members) of the talented athletes from Plymouth Leander at the event.

“I’d also like to thank everyone for raising money for our charity, the Marine Conservation Society. The MCS does brilliant work for our seas, beaches and marine life and we’re delighted to support them.”

Andy Bool, head of fundraising at MCS, said: “It’s been great to see so many people enjoying themselves in the sea and at the same time raising funds to protect our marine environment and helping to ensure that many more people can enjoy the sea in the future.”

Full results and timings for all participants can be found online at www.thebluemile.org