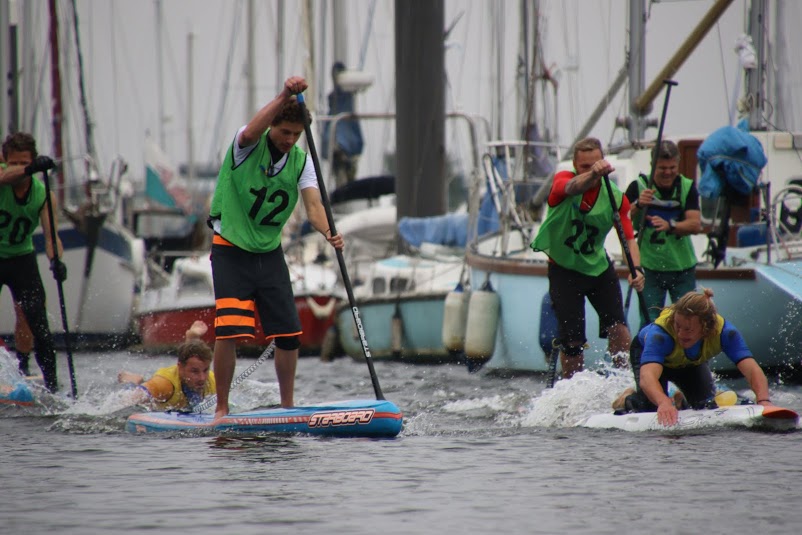 The battle to decide the King and Queen of Cardiff Bay was held on the 18th October from the Cardiff International White Water centre. Emily King updates SUPboarder on the racing that forms part of the Welsh Surfing Federation selection for the 2016 ISA world championships.

Welsh and English paddlers took to the waters of the River Ely at the prestigious Cardiff International White Water Centre in conjunction with the Water Skills Academy and Welsh surfing Federation.

The race was set on a stunning section of water taking in both industrial and scenic sights of Cardiff. Paddlers rounded two circuits finishing back at the CIWWC to a busy centre of white water rafters and Kayakers

A good fleet of leisure 12’6, 14’ and unlimited paddles participated. This race was also the first in Wales to include prone paddlers whose performance added to the excitement, talent and competitive spirit. Paddlers included those who were trying out endurance racing for the first time, along side seasoned athletes such as Starboard’s Scott Warren,  Fanatic’s J Sup Manning, current UK SUP surf champion Matt Barker-Smith and previous Welsh National race champion Abi Barker-Smith.

The race had a staggered start with the 14’ and unlimited pulling away. Matt Barker smith took off extremely fast on the Starboard Sprint Unlimited (17’6 x 23″) taking a rapid lead! The 14’ men raced in his wake with all paddlers trying to take a clear lead and heading off out of sight, setting a strong pace for the 12’6” and prone men to start behind.

There was a lot of vying and chop for the lead of the 12’6 men including the prone paddles, who shot forwards a cracking pace from the start line pulling into a draft and heading off around the bend. Fourteen-year-old junior paddler Tom Horn took the same start line on the 12’6 red paddle inflatable holding his own with the rest of the field.

Women’s 12’6 was a fiercely competitive with local paddlers sprinting to take font of the pack. Local and winning paddler Mi Richardson took a strong lead setting a testing pace for all to catch.

The leisure class had surf shape, touring boards and inflatables, plenty of cheering and banter between paddlers sent this fleet of into the first bend of the river for the two five km circuits up flow and down flow of the river.

As the first lap of the race played out the field had stretched out, all paddlers seemed to be working at a good rate with no difficulties as they rounded the buoy to take off into the last 5Km lap. The leisure paddlers showed great grit and strength paddling the same full 10Km race with no one choosing to opt out after the first 5km.

Junior paddler Tom Horn passed the buoy and continued with a good effort down to the finish line to take his first place on the 5km junior race.

Matt Barker Smith on the unlimited cruised over the finish line taking overall first paddler followed by a four minute gap before the 14’ men appeared with Steve Carter paddling furiously to take first place in his fleet.

The contest was on between Red Paddles Jamie Harmann and Scott Warren to take 12’6 men’s first place, with local Welsh paddle Andy Dalrymple in hot pursuit taking third place. Scott Warren opened up a lead towards the finish with a hard sprint effort and came romping home in first place.

Womens 12’6 weren’t far behind the men with first placing going to Mi Richardson, Abi Barker Smith was hot on her tail trying to close down the gap that had opened up between them both. Jay Doyle came in close behind for third. All the ladies came in with a good sprint showing true paddling skill.

Leisure and surf shape paddlers came in with smiles and some final explosive paddling over the finish line. Local Cardiff paddler Neil Price took a good lead with Paul Salter coming in second.

Prize giving was in glorious sunshine and full view of the Rafters and Kayaks flying around the rapids at the White Water Centre. Paddlers, organizers and staff shared a great sense of achievement as paddlers took to the podium to take their prizes. All agreed that it was exciting times for Welsh paddling community and that the up and coming WSF Langland Surf SUP and technical SUP prone race at Langland on 14th and 15th November would bring a full calendar of events to end this year on.