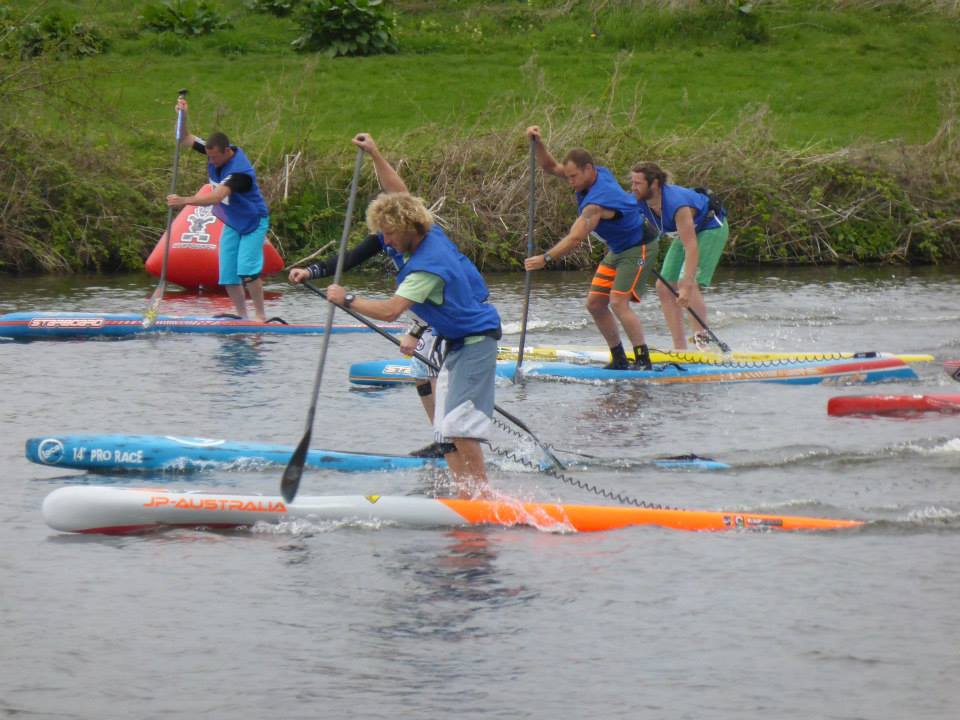 Last weekend saw the UK SUP clubs summer race series kick off with stage 1 hosted by Central SUP. This was a distance race over a 10km course and a couple of junior races. Chris Kenyon updates SUPboarder on the race action…

It was a cold and chilly start for the opening race of the UK SUP series but the competitors were out in force and eager to get on the water. The setting for the race was the mighty river Trent next to the national water sports centre in Nottingham. The course would be a 10k route, meaning 5k upstream with a turn and then a 5k run back down with the flow to the finish. With 62 racers representing all categories of the field it would be an exciting event.

Once the formalities were out the way the men’s 14ft left the start line at 11am sharp followed by the other classes. We watched them disappear up the Trent as battle commenced. The paddlers enjoyed the challenge of getting their heads down and pushing forwards. An hour or so later the first few paddlers could be seen taking the racing line on the final bend to the finish line. It was a tense atmosphere but a clear win was in sight for Ben Payne with Scott Brown and Mark Slater closing in behind. Ben took the finish line with Scott getting second and Mark coming in third. The rest of the pack began to turn the corner with Jo Hamilton-Vale being the first female across the line. A sterling effort by all who took part as the final few crossed the line and enjoyed the feeling of their accomplishments.

The action did not stop there as it was over to the lake for the Central SUP junior race. Jamie Harman from Red Paddle Co kindly offered the use of the junior race fleet and gave some excellent tips to our up and coming paddling youth. It was the under 12’s first who battled out a 2 lap course of the lake. There was some excellent paddling happening and such a good effort by all who took part. The over 12’s were up next with 4 laps of the course which was a pleasure to watch. Parents and club members alike cheered from the side and pack leaders Brad and Luke led a tense battle all the way through the course. Brad managed to keep his lead with some great technique and buoy turns with a final sprint to the finish with Luke right behind him. It was Brads first win as he only started paddling at the end of last summer when he joined Central SUP. The junior racing is one of the most rewarding aspects of these type of events as this is the future of our sport and with 12 juniors all keen to jump on the water and race I think the prospect is very exciting. It’s going to be great to watch how the junior series unfolds over the course of this year.

Finally the sun decided to come out at the end of the day and the awards were given out to those who had succeeded. All in all the feedback was very positive and everyone had a good time at the race.

Not long to wait, or prepare for stage 2 which is being hosted by Blue Chip on May 9th with their annual Battle of the Thames. See you there.