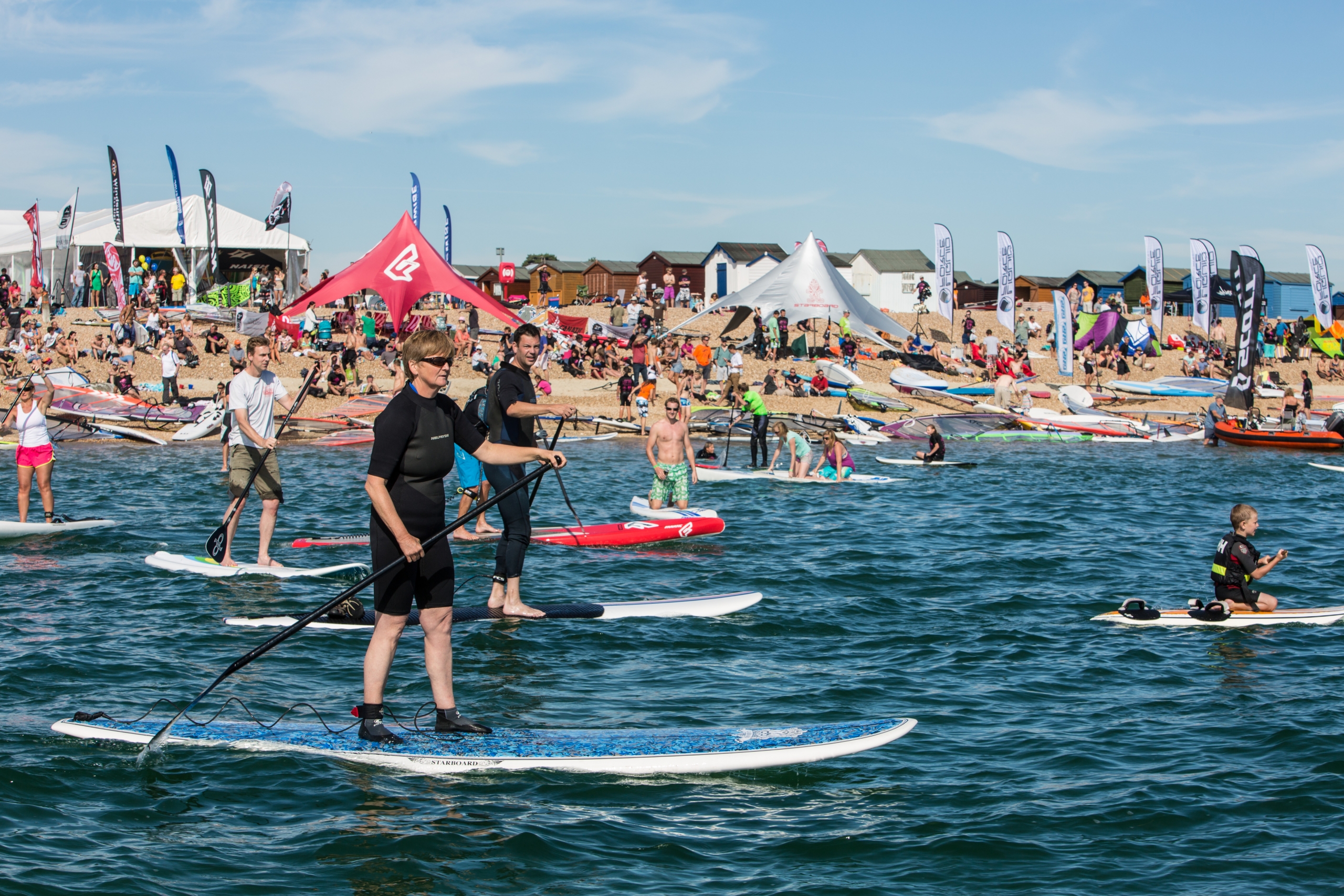 Countdown to the National Watersports Festival is on! One week to go.

The countdown to the start of The National Watersports Festival (NWF) – the UK’s largest multi discipline watersport event – is well and truly on, with just over a week till the start!

On Friday, 5th September, over 500 competitors in windsurfing, SUP, kitesurfing and kayaking will converge onto Hayling Island in Hampshire for three days of racing, coaching and mingling with the industry’s best.

Cheering them on will be around 10,000 spectators eager to have a go at the various taster sessions; checking out the industry’s largest trade show and, of course, joining the partying that is a synonymous with the event, that is now in its 9th successful year.

Spectators will also be in for a treat this year with the very first ‘Night Skate Park’, with the top kiteboarders putting on a floodlit show on Friday night on a water playground of ramps and kickers! You don’t need to be a kiteboarding legend to take part – seriously, give it a go and show em what you’re made of!

The event is completely free for spectators, who can watch all the racing, including the floodlit spectacles, visit the trade show and food/drink stalls plus have a go at all the sports. Tickets are still available (including day tickets) to compete or to join in the partying. Visit nationalwatersportsfestival.com/participate/

Some of the industry’s biggest names will be attending this year’s festival including Ross Williams Sam Light and Marie Buchanan. However, what is different with the NWF is it’s become the festival where every day ‘weekend warriors’ rub shoulders with Olympians and world champions; all racing, side by side.

“The event is all about having a go,” explains events director, Allan Cross. “Of course we do get the pros to the event and they never fail to amaze the spectators with their phenomenal racing and tricks which they perform right up and close and personal. However, we also invite racers of all levels and indeed any age. It may sound like a cliché but it’s the taking part that counts and with some of the races taking place in fancy dress you never know if you’ll be competing alongside Batman or Bugs Bunny. It takes the stress out of racing and makes it much more fun (although still pretty competitive as no one likes to come last!).

“The event attracts the top manufacturers including Tushignham, Neil Pryde and Cabrinha, showing off their brand new kit to a massively captive audience. Every year we see people walk straight out of a ‘taster session’ and head directly to the trade fair and buy all the latest kit – there and then! They’re hooked and we’ll then see them every year, happy as larry that they had a go at something they’d always harboured a desire to try.”

The event has become known as the ‘people’s festival’ as there is no big title sponsor vying for the spotlight. Instead, The NWF is a consortium of clubs and associations, with the principle aim to get people on the water, having fun. The NWF was even featured on BBC One’s Breakfast Show on Saturday (23rd August) with legendary presenter, Mike Bushell having a go at Stand Up Paddle Boarding and promoting the event!

This year the event is being filmed live throughout the weekend, so all the sofa surfers at home and abroad (where many of the competitors come from) can watch the event unfold from the comfort of their own home! nationalwatersportsfestival.com/live/