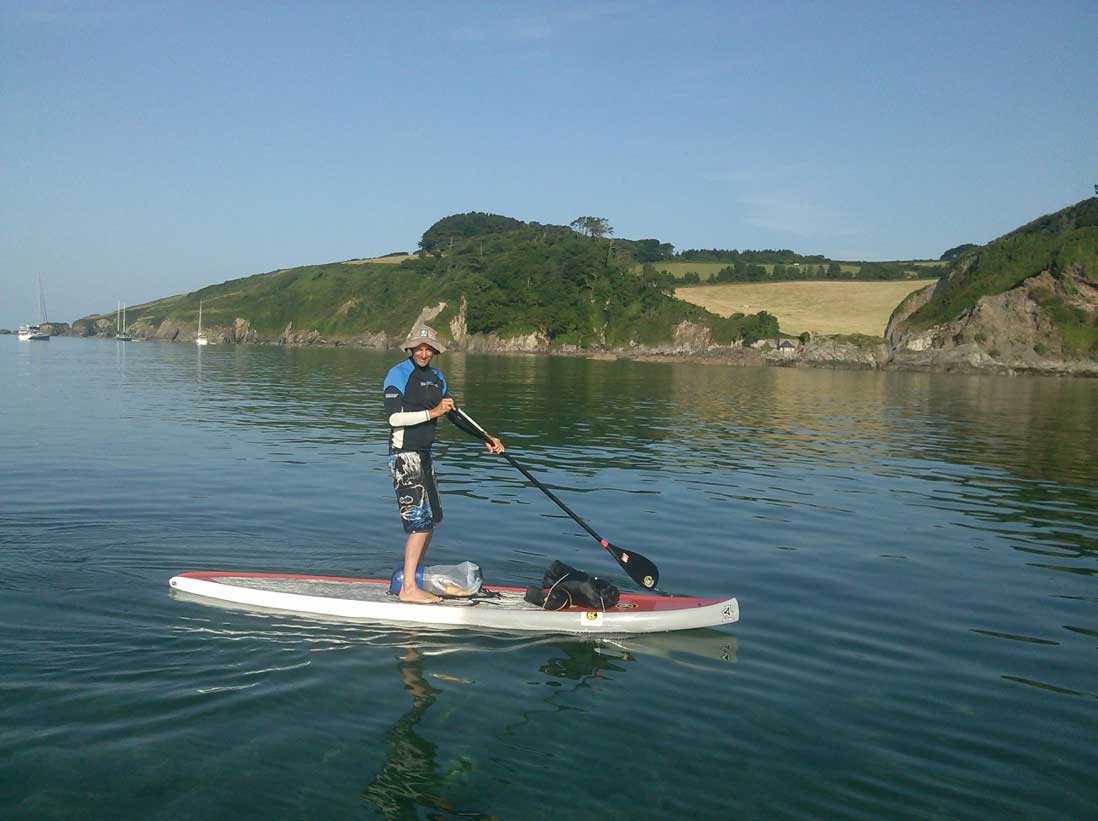 SUP camping… have you tried it yet? Summer is the perfect time to get exploring and have a micro adventure on your SUP. Just grab a mate, a tent and the bare essentials (sufficient food, water, spare clothing, and a phone for emergencies) and explore your local area from the water. With the right preparation you can avoid the hardcore headwinds and tricky tides, reward yourself with a descent meal and hot cup of tea in the evening, and even a beer in the pub at the end. But preparation is the key! As Mark and John found out during their recent semi-successful SUPing micro adventure in South Devon. Mark tells the story of their SUP camping adventure from Wembury to Wonwell Beach, in South Devon, and back again. And provides afew useful tips. 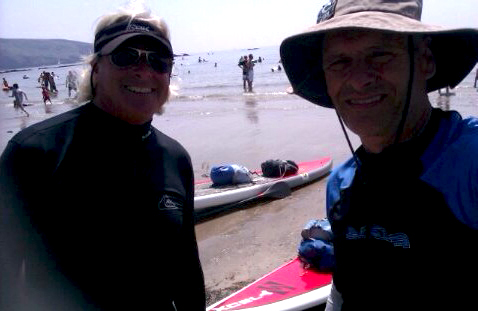 Standing on Wembury Beach with our camping gear strapped on the sups itching to set off, was long in the coming. This trip was talked about last summer, only to be blighted by the inclement conditions that ensued for nearly a year. After all, who in their right mind would embark upon a jaunt along the South Devon coast with definite dates and itineraries to adhere to, only to have the disappointment of weather induced cancellations or knocked back by gales in futile attempts of bloody mindedness; of man against nature. We all know who wins, and who has most to loose; that it’s basically over before the start! This is why we had for this trip, an open ended approach as far as weather windows was concerned. An attitude afforded in our case (John – ex fire service retiree . Yours truly – self employed…. very self employed… indeed too self employed for my own and my families good sometimes!) by the retired or self employed by dint of circumstance.

So we take our first strokes out past the squealing throng of holidaymakers seemingly hell bent on enjoying themselves come hell or high water. All with the slightly manic tinge brought on by  months and months of endured rain, bone numbing easterlies, and floods etc… It’s not long before we round Warren Point and start heading towards Stoke Beach. This stretch of coastline is virtually untouched except for a cottage and a  few  lookout posts, all of which preside on National Trust land. The water quality around this area is truly outstanding, particularly on a day when the sun shines onto a calm and slowly undulating, near mirror like ocean. A certain feast for the eyes to spy out shoals of fish, eater crabs and the mesmerizing sway of the kelp beds, dancing to some unheard gaian tune, or perhaps just the outgoing tide! We manage to startle a lone seal by our apparent closeness to it’s natural habitat, or maybe in parenthesis, the vibrant hue of my gaudy boardwear causing havoc in the world of seals, where greys and blues are the order of the day. 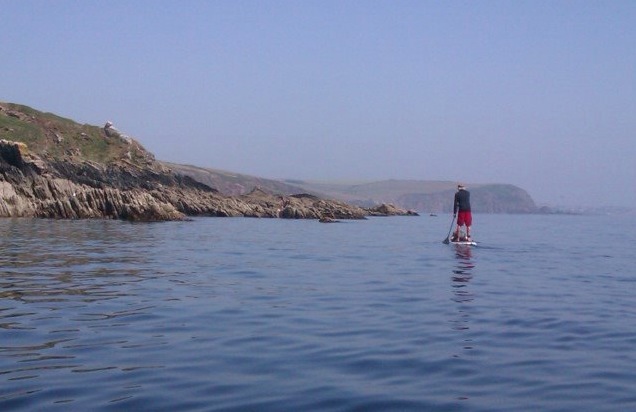 We eventually land at our first stop off point aided by a puff of downwind action. The only significant breeze of the day which seemed to die off when we reach the beach immediately east of Stoke Beach. I ventured in for a swim and cool down to the harpings of John’s cruel jibes for not running and diving in straight away. I shuffled in step by step oohing and ahh’ing like a girl, until after quite sometime and much abuse, I became fully submerged. John ran and dived in like you’d expect an ex-fire service operative might, and emerged out of the sea looking mighty pleased with himself. Onwards and upwards.

Due to it’s relative inaccessibility by road I’d expected the stretch of coast between Stoke and our proposed destination of Wonwell Beach (Mothercombe) to be mostly desolate in respect of human inhabitance. How wrong I was. Homosapians were ten to the dozen on more than one secluded rocky slivers of sand.  Aided by small inflatable boats or kayaks, our species seemed to dominate this overlooked part of the Devon coastline. This said, the coast retained a healthy indifference to our encroachment, with it’s craggy beauty denying any permanent dwelling a foothold along it’s jagged edge. That is apart from one dwelling – the romantic gesture that is Carswell Farm’s beach hut. A one room, west facing, oak shuttered, stonewalled piece of heaven in Devon. Situated at the foot of a steep and verdant cliffside and on a beach not much wider than the width of the hut. It’s for me, a triumph of man’s ability to transcend with such  simplicity of design working perfectly with it’s surroundings. A real visionary piece of work, and probably built by a farmer who was perhaps Byron, or  Laurence Llwellen Bowen’s great, great grandad, in a past life! A weekend spent at this place could coax great thoughts out of the most dull-ed of minds. Although the slightly prohibitive cost of renting it for two days or more, might put off the more cash shy ‘would be poet’ amongst us. I’ll let you decide! (it’s on t-internet). If truth be told, I would live there at a drop of a hat, and probably grow a beard longer than a windsock, whilst losing one’s capacity to knit together coherent sentences, alongside learning to knit fishing nets, but all the while trying desperately to look a tad like Ernest Hemingway (not to be confused with Wayne Hemingway, the slightly effete english fashion designer! ) at the time in his life when he wrote `Farewell to arm.’

But I digress folks… from Carswell Beach Hut to the point at Mothercombe was but a short hop. But conversely, the paddle to our destination from the point to Wonwell seemed to take for ever. Passing moored yachts in clear blue water reminded us both of  previous yachting trips to Greece, making the final slog pass a bit sooner. Time to set up camp on the beach, break out the trangia and get a-brewing and a-scoffing. Unfortunately, this is the time I had to break the awful news to John that I’d forgotten the friggin teabags! About an hour elapsed before the muttered obscenities and `the giving me evils` subsided, we resigned ourselves to warm water drunk out of plastic bottles! The decision to furtively erect the tents when the few families who were there enjoying the remnants of the day eventually left, seemed the prudent thing to do. It occurred to me that camping there would be frowned upon by some authority or another. After all, being `shooed` away by a ruddyfaced, cider infused landowner brandishing some medieval farming implement in the early hours of the morning wouldn’t be ideal.

Breakfast should have been milky porridge… the breakfast of champions I’m sure you’d agree?! But I was remiss in spooning in the dried milk when I pre-prepared the meal at home. So it was porridge and water for breakfast… the breakfast  of people who forget stuff!

After which we paddled back to Wembury, taking just over 3 hours………… then John and I went to the pub.  Well, where else would we go? Hemingway would know.

On reflection, I’d thoroughly recommend sup camping overnighters… an exciting, fun way to explore your favourite part of the coastline, river or lake. And with a little more trip planning than I employed, you could enjoy the adventure at it’s upmost.

Wasn’t it Wilde who said, “experience is the name we give to our mistakes” ?

Here are 10+ tips (mostly gleaned from one’s recent faux pas! Well… you might as well learn from our first faltering steps taken as newbie sup campers!)

1. Check out the plethora of kayak camping videos on the internet… they will inform and inspire.
2. Attachment points on the front of sups makes sense.
3. Rather than one big dry bag, opt for 2 or 3 smaller ones to help even up the load on your sup.
4. Use the lightest camping equipment you can. It`s surprising how heavy the pack weight ends up being, even with some of the barest essentials forgotten!
5. Using several collapsible water carriers instead of one big one seemed to work well for us.
6. We couldn’t get a mobile signal at our destination… so bare this in mind.
7. Pre-prepare meals before you set off and place them in tupperware type containers or those zip resealable bags which fold up to virtually nothing.
8. Take some extra polythene bags with you for wet clothes or rubbish.
9. Start checking the weather websites at least a week before you go, and then make decisions on what you should wear, and what route you could take .
10. You must take a camera and take lots photos.
11. TEA BAGS
12. TEA BAGS
13. TEA BAGS
14. And inflatable sups might make comfy bed mats!

So break out your sup, get out there and explore, whilst the weather is still clement ……come on, you know you want to!