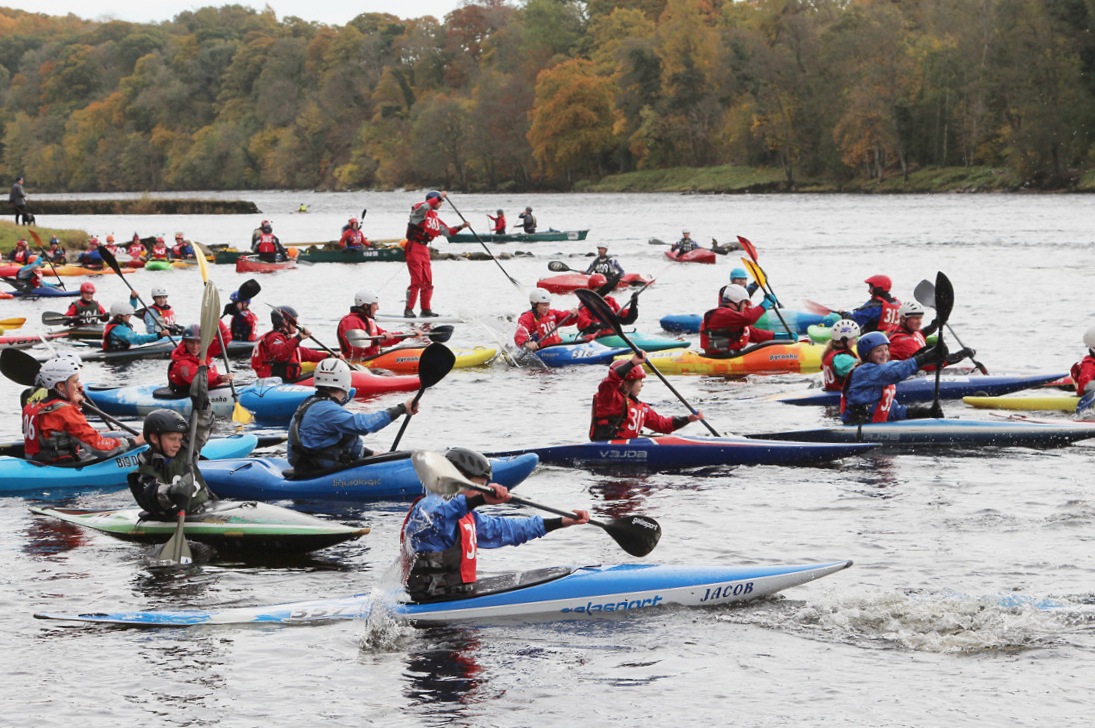 On the 26th October 2013 the ‘Tay Descent’ will be taking place on the River Tay in Perthshire, Scotland. Tay Descent 2013 is the fourth consecutive annual race and tour the Scottish Canoe Association have organised on the River Tay, the largest volume river in the UK.  The event includes two courses, a long course of 23 miles starting in Dunked and a short course of 7 miles starting at Stanley Mills. Both courses finish in the historic town of Perth.  There are classes for every type of paddle craft and this year sees the introduction of a Stand Up Paddleboarding class for both courses.

With grade 2 rapids, standing waves, boils and turbulent water found on both courses, Tay Descent 2013 is expected to produce some of the most technical white water SUP racing the UK has ever seen.

SCA volunteers provide on the water safety cover but it is recommended entrants have some prior experience of paddling in moving water. Typically Scottish, there is also a huge social element to the event and many paddlers enter with no intention of racing but merely for the fun day out on the river.

Tay Descent entrants will receive an event t-shirt, post-race refreshments and free entry to Paddle 2013- Scotland’s Canoe and Kayak Show which takes place in Perth over the same weekend.  There is also an optional traditional Scottish Ceilidh on the Saturday evening.

Full details and online booking can be found at taydescent.org. You can also keep up to date with the latest news at www.facebook.com/SCAPaddleShowTayDescent

Last year Keith McKerral, SUP & kayak instructor with Paddle Lochaber, took part in the Tay Descent on his Red Paddle Co Nine Six All-water SUP. Keith was the first (and only!) person ever to take part in the event on a SUP. Here’s what Keith had to say about the event from a SUPers perspective;

“The Tay Descent is an annual race on the River Tay near Perth, organised by the Scottish Canoe Association. The race is open to any class of paddle craft from play boats to sea kayaks to open canoes to specialist competition boats like K1s and Wild Water racers, with different prizes for each class. There are also two different length courses 23 miles or 7 miles. As this was my first whitewater SUP experience I chose the shorter course with only one major rapid, the grade 3 Thistlebrig.  This was the first year that anyone had entered on a SUP so the organisers put me in the Sit on Top Kayak Class, which meant I was starting with the whitewater kayaks and slalom boats. I did feel like a giant milling about behind the start line towering above all the kayakers sat in their boats. I got a good start in amongst the jostling of about 50 boats starting at once.  The first challenge was not far off as the first bend leads in to the massive wave train of Thistlebrig, as all the little boats jumped on the roller coaster I took a more cautious approach and stayed river left and then nipped through the bumpy stuff on my knees.  After the excitement of Thistlebrig the next 6 miles were a long slog along flat slow moving water. The great thing about being on the SUP was that everyone I saw on the water wanted to chat, ask about the board and mostly tell me I was crazy, even a few fishermen said hello.  Finally after a lot of head down paddling I reached Perth.  A few hundred meters from the finish I tried to adjust my stance and found that having not moved them for a while my feet were totally asleep!  A short swim followed encouraging  laughter and clapping from the onlookers that had gathered on the bridges and river bank.  After getting sorted out attempting to regain as much dignity as I could it was a head down sprint through the finish line. I finished 1st in my class and was 31st overall out of 103 boats with most of the boats ahead being specialist competition boats of one kind or another.  I think next year I’ll be back with a twelve six to give the fastest boats a run for their money!’ – Keith McKerral from Paddle Lochaber www.paddlelochaber.co.uk

So come on… if you fancy a Scottish SUP challenge and knees up, why not take part in the Tay Descent this year and join Keith in the SUP Class and on the podium!

To be in for a chance to win a pair of 2013 Tay Descent SUP entries (including event entry fee for either long or short course, t-shirt, post-race refreshments, & entry to Paddle 2013) & Ceilidh tickets, just answer the following question correctly;

Q. What are the lengths of the two courses in the Tay Descent?

Please write your answer below on the Facebook comments.
Closing date 30/06/13 at 9pm.
The winner will be selected at random from all the correct entries, and contacted by the organisers of the Tay Descent with more information.