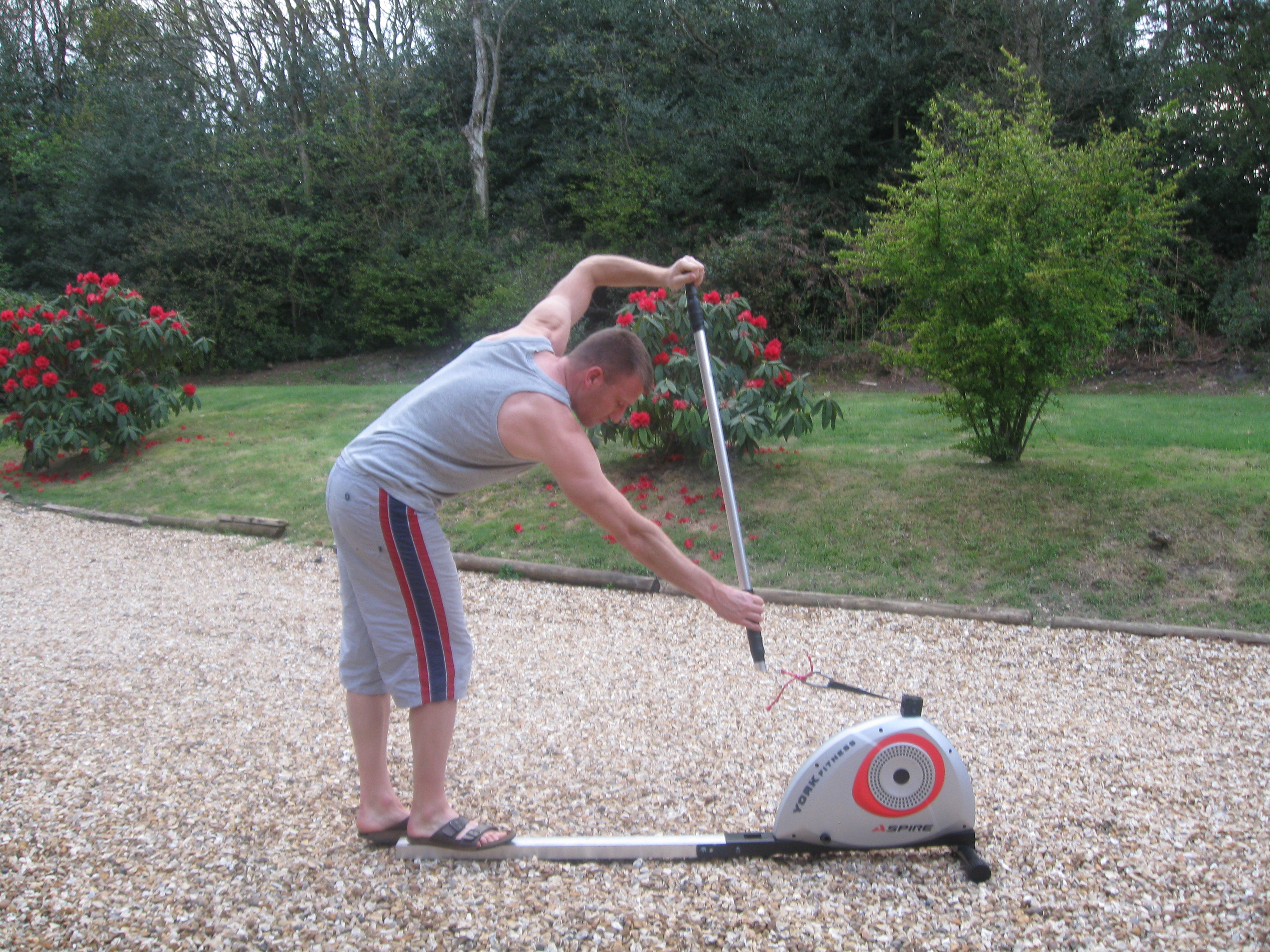 Dr Bryce Dyer doesn’t let being away from the water stop his paddle training! Afew years ago, taking some inspiration from rowing he built his very own SUP Ergo Trainer for less than £50. Read on to find out how…

In all sports, training specificity is important. If you’re going to race anything like a boat, a bike or a board, there really is no substitute for getting out in the right environment to get a high quality training session in. However, many of us are busy with other aspects of our lives and these can vary from having a demanding job, a young family or being far from the water. With this in mind, if you look at several other endurance sports, there is often a provision made for some form of indoor training that you can do in the relative convenience of your own home. If you run, you can use a treadmill. If you cycle, you can use a turbo trainer. For the SUP paddler though, there isn’t much that’s affordable on the market to allow you to do the same. Many instead often resort to the rowing ergo as the next best thing.

Much of my current emphasis is in competitive cycling so I often find it impractical to be able to get on the water any more than once or twice a week on my SUP. However, I felt that if I could have something available at home, I might be able to squeeze in another shorter session or two per week. To do this, I set myself the task of building my own SUP ergo. As it turns out, I put the whole thing together for less than £50 via EBay and a bit of graft in the family shed. As per the usual disclaimers, if you wish to undertake a project like this, make sure you have the right tools and a safe environment to do any work. If in doubt, don’t.

To start with, you need some form of resistance unit to form the basis of the SUP ergo. I decided that a rowing ergo would form the best platform to then modify as they are readily available second-hand on sites such EBay or Gumtree. However, rowing as an activity uses more of the larger upper body muscle groups simultaneously so these ergometers typically have too much resistance for a SUP paddling movement. If you obtain one of these, you’ll need to find some way to depower it.

The resistance units in ergometers typically come in one of three types. These are fan-based, fluid-based or magnetic-based resistance units. Fans are generally the noisiest (worth thinking about if you have neighbours), fluid systems are sealed units and difficult to modify and magnetic-based systems typically involve a series of internal magnets that are positioned close to a metal flywheel (whose attraction then provides a level of resistance). For this project, I opted for a magnetic unit.

I actually managed to find a brand new rowing ergometer online that was being sold very cheaply on EBay as several of its main parts were missing. The first thing I did was to remove any parts from it that were not needed. So, parts like the rowing foot rests were removed, the cable actuated resistance unit was torn out, the rowing handle was unclipped and the sliding seat was discarded.

After this, the next job was to work out the basic geometry and footprint of the SUP ergo for when you use it. The first thing was to create the ‘paddle’. For this, I found an offcut of round aluminium tube which I trimmed to length by performing the SUP paddling motion and videoing it on my iPad to review it. You need to be able to perform the full stroke action (including the typical bend at the waist) without hitting the floor. I then review the footage, cut a bit off the tube and then repeated this process until I was happy. Once this was done I then used a spare SUP ‘T bar’ handle that I had kicking around at home. You could instead use a rod drilled to fit through or mount a ball on the end. I bonded the T bar into the round tube using epoxy resin and let it set. Once it dried I drilled a hole in the other end of the paddle so I could attach a karabiner I had lying around in my spares box from my old sailing days. This then clipped into where the rowing handle was attached.

The big issue is that because a user sits on a rowing ergo it can’t move around. However, by removing the sliding seat on this rig meant this needed to be replaced with some other way for it to be anchored down. I measured the slot hole that the rowing sliding seat section slid into and bought a cheap length of aluminium box section of the same size (again from EBay) that (having been measured and drilled) would then be bolted into the old sliding seats mounting position. This box section would then be stood on when in use thereby anchoring the ergo down. The length of this was set when I was experimenting with the paddle length (and then marking the ground using tape). I actually want to weld a proper footplate on the end of the box section when I get the chance which would be a neater solution, but I haven’t got round to it yet. 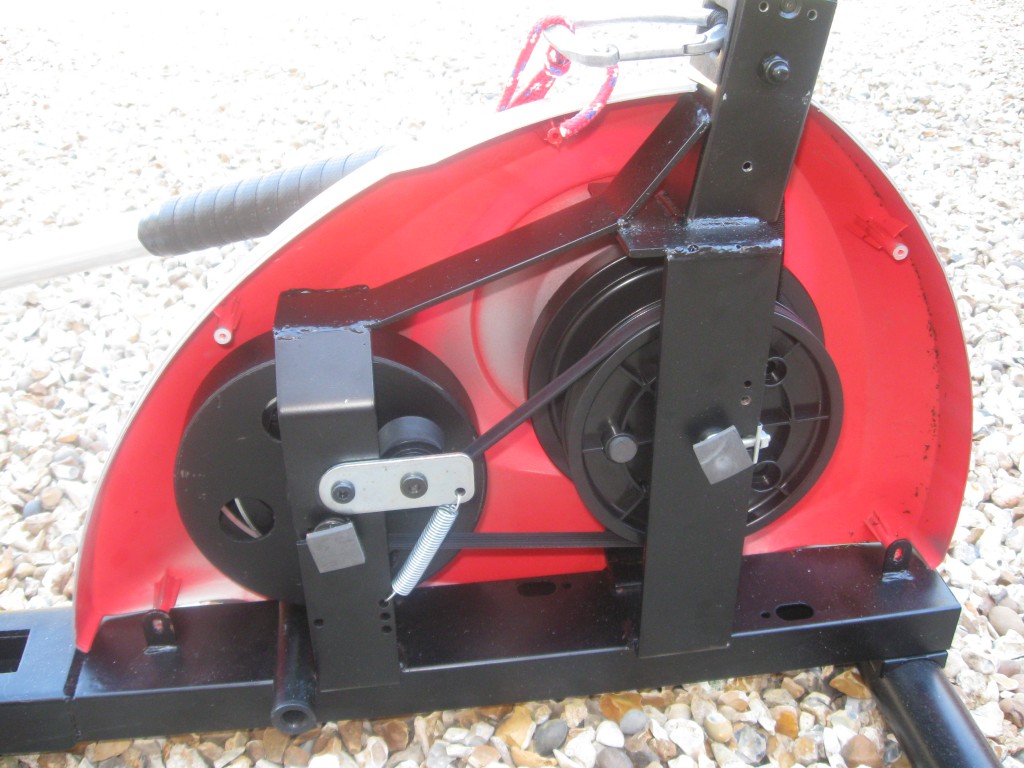 Getting the resistance right.

The next stage was to depower the magnetic resistance unit. To do this, I had to remove the external plastic casing by removing the casings screws. Having now got inside I could see the basic mechanics of the machine. I then took photos of everything as it currently was in case I didn’t know how to put it back together.

I unbolted the flywheel unit and slipped off the drive belt to be able to remove the combined flywheel/resistance unit from the machine. By dismantling the resistance unit I found it had two large magnets positioned inside the flywheel on sprung callipers. I removed the circlip holding the unit together, stripped it down, removed one of the magnets, reassembled the whole machine and then tested it. I found though that this was still too strong for me. As a result, I dismantled it again, cut the remaining magnet in half with a hacksaw, glued it back to the calliper and then spaced this further away from the metal flywheel to reduce its resistance further. By increasing the distance of the magnet from the metal flywheel, weakens its attraction and thus lowers its resistance. I then reassembled the whole unit and tested it until I was happy with the result.

Alternatively, if you needed to depower a fan unit, you could either remove some of the fan blades that rotate or drill holes in them (to let more air able to pass through them).

The general conversion work might seem a bit daunting but it only took me a couple of hours of time to get it together. There are some limitations though. The stroke technique can’t be simulated fully as the paddle can’t be feathered. This could be improved by having a roller your bottom hand holds that slips over the paddle shaft (to act like a rotational bearing). This machine lacks the instability of a board on the water but this could be simulated by adding a ‘seesaw’ platform on the end of the box section you stand on.

There are other benefits though – by adding a pad to the box section you stand on means you can drop your knee down and the rig then doubles as an ergo for OC1 paddling or canoeing. Plus, if you find a rowing ergo with a computer on it, you’ll be able to have speed and timing telemetry visible as well as (with some models) possibly power output. Power training will ultimately (in my opinion) revolutionise SUP training in the same way it has cycling so to have that metric on hand is an effective way to set specific interval training sessions that will directly benefit your racing.

An ergo is no substitute for time on the water but hopefully, this all might give you an idea of how you could achieve something similar ahead of when the snow falls next winter or when you get caught too many miles away from the water’s edge.

This might be just the thing to get your paddle fix whilst at home. Keep paddling, keep training and keep paddle fit so you’re SUP ready when you’re allowed to hit the water again.